After graduating from the University of South Carolina with a broadcast journalism degree in 2011, you worked for ESPN and the SEC Network before accepting a teaching job at Stratford High School in 2015. What prompted the career change for you, and how has the transition been?

I always tell people I wasn’t looking to leave ESPN and the SEC Network. It’s important to understand that I loved the work I did for the networks, but I had an opportunity to step into a truly unique situation. That situation is that Stratford High School is my alma mater, and I work hand in hand with Stella McCombs, who was my broadcast journalism teacher in high school. When I was making my decision, I asked myself, “How many people have a chance to give back to a school that gave them so much while working with a person who changed the direction of their own life?” The answer to that, of course, is no one, or at least very few people. That being said, the decision was very easy to make. If it wasn’t for Stella and me having attended a school with a broadcasting program, I would have never considered it as a college major or career. Stella and Stratford truly changed my life in that regard, so I can’t see why I wouldn’t want to give back.

What are you most proud of from your time at ESPN? What was your favorite event to work?

At ESPN, I worked on a team of about 15 people just to cut the Super Bowl highlight between the Broncos and Seahawks. We produce content from this big room called screening. It is what it sounds like: a giant room where you screen games. Typically, this room is always filled with people, but on Super Bowl Sunday, it was different. Only the people working on the game were in-house, so the room that fits 200 or more people only had about 15-20. It’s not that I’m proud of working on that specific event, but I am proud to say that I worked on a team with all of those people because it felt like the powers that were assembled “The Avengers” of TV production. I really felt like I was working with the best production staff in the business.

At the SEC Network, my favorite event to work on was the SEC Baseball Tournament. I was in charge of producing the ART (advance replay technology) machine. I grew up playing baseball and consider myself very knowledgeable [about] the game. During that assignment, I got to apply that knowledge in advanced ways such as identifying and telestrating patterns of pitches that consistently get outs. If you’re a real baseball nerd like me, it was an awesome job.

How do the pressures of advising high school students compare to the pressures of putting together highlight reels or making packages for Baseball Tonight? What have been the best and most challenging parts of teaching so far?

Putting together SportsCenter highlights or Baseball Tonight tapes are stressful in that you have that deadline that can sometimes feel like an impending doom. The good news is that teaching does not feel like an impending doom that a looming deadline can feel like. The pressures of teaching, I think, are like the pressures of being a college football coach. What I mean by that is we have three levels of our program, of which I teach level one. My job is to send talented students to level two of our program. If I can’t successfully do that, then when they get to the third level of our program, our daily show won’t be very good. In that aspect, it’s the same thing as a coach getting judged after his first recruiting class has been on campus for three years. If that team full of juniors isn’t any good, then the coach didn’t do a good job his first couple years.

The best part of teaching, by far, is building the relationships with students. I really enjoy getting to know all my students and connecting with them on a personal level. If I can teach them how to be good television producers, great, but if I can connect with them and make them better people, then that’s even better.

There are several challenging parts about teaching. First and foremost, television production isn’t like math or English. What I mean by that is students have been learning those subjects their whole lives, so each grade level can build off the previous year, at least to some extent. Most of these kids have never used a camera outside of their iPhone. Most of these kids have never edited a video on anything other than Windows Movie Maker simply to get it on YouTube. Conceptually, shooting video and producing good content is complex, and these kids are seeing it for the very first time. For me, a challenge is boiling material that I know like the back of my hand down to the basics. I’m a pretty energetic dude, and sometimes I have the tendency to get ahead of myself a bit.

I think the bigger challenge, though, is bringing it every single day. I would be lying if I said I never produced some easy story on a Friday night after a long week as a reporter just to get through. I’d also be lying if I said there wasn’t a single day I cut out of work a little early after working 15 hours the previous day at ESPN. Teaching is different, though. You can’t mail it in. Kids see right through that. If I’m not passionate and energetic every day, kids see that and respond to it accordingly. It can be tough to get through some of these long days where evaluators come in, you have a faculty meeting, and grades might be piling up a bit. However, that doesn’t matter to the kids.

How did you initially get involved with SIPA? How did SIPA shape your interest in broadcast journalism?

My first trip to SIPA was during the spring of 2005, during my sophomore year of high school. On the Friday night, I watched all the rising seniors give speeches for president. I looked at Stella, my teacher at the time, and told her I was going to run the following year. Well, I did run. There were like eight candidates, and I didn’t think I was going to win. So, I just wrote this speech that opened me up about how I like eating junior bacon cheeseburgers from Wendy’s, I don’t get dates, things like that. I just wanted to stay away from the student council, great GPA aspect of my credentials and come across as an everyman, so to speak. Anyways, it worked. I was elected president of the conference and got to go down to the Poynter Institute for Karen Flowers’s first conference as executive director. Needless to say, having attended [the] Carolina [Journalism Institute] the year after, I stayed involved and helped out whenever I was asked. That involvement extended to me judging shows from Connecticut, and when I was relocated to Charlotte, Leslie Dennis asked if I wanted to teach a couple seminars, and I was delighted.

A conference like this really just solidified my interest in the field. As a student, we had some really cool opportunities to meet with professionals and learn from some really, really smart people. I hope now that I’m on the other side, I can help some kids get interested in the field.

What are your favorite memories from SIPA events? What did you learn from those conventions that you pass onto your students today?

I’ll preface my favorite SIPA story with this: Every year that I have been back to the conference, I hear the same warning to the students over and over again. That warning is, “Don’t pack in the elevators.” Well, I never heard that warning in 2005 or 2006. It was in 2007 I first heard it, and coincidentally, that was after our group stuffed 22 people in the elevators. To this day, whenever I hear that warning, I look at Stella and sort of nonverbally say “remember that?” So, I’m pretty sure we were responsible for that, and it just makes me laugh every time I think about it.

I can’t remember whose session I was in, but I actually learned a really simple way to produce packages at SIPA. This guy was going over how it can be tough to get started writing a package after you’ve gotten all your sound shot. His solution was really simple. You lay out your bites and figure out what you want to hear first, second, third, and so on. Once your bites are laid out, you just write a sentence or two connecting the dots. I actually used that advice for the rest of high school, into college, and actually as a reporter. For some straightforward stories, it really is the best way to put one together. Now, I’m teaching my students that same thing when they are cutting their first packages.

In 2016, you returned to the annual SIPA convention, and this time you brought your Stratford High School students with you. What was it like coming back as an adviser compared to your experiences as a student and instructor at past conventions?

Last year, I was a nervous wreck. We had 28 students with us, I just remembered thinking, “Oh my God, what if one of these kids goes missing on my watch?” It was a total worst case scenario playing out in my head. It’s definitely a different thing coming back as a responsible adult than it is as a student who gets to just have a blast for two-and-a-half days.

Of course, my kids made fun of me and continue to make fun of the idea of what I’ll be like on the trip this year. I told them I’m going to make cardboard cutouts of my face looking angry and hang it in front of the peep holes of their doors so when they look out they see it and think, “Better not break curfew, Fabiano’s out there!”

Seriously, I think I’ll be a little less stressed after having done it once as an adviser.

What advice do you have for scholastic journalists?

Stay involved. When you attend a college to major in journalism, you might not pick up a camera until your junior year with all the [general education] and intro classes you have to take. I got involved my freshman year and was using cameras, interviewing, writing, and editing before I even set foot in J202 [at USC], which is just all about newswriting. No doubt the instructors are great and will help you hone skills, but staying involved keeps you practicing those skills. The more fine-tuned you are walking into a classroom, the more a professor is going to be able to help you grow. And speaking of those professors, get to know them. I still talk to Rick Peterson and Harvie Nachlinger from time to time and try to visit whenever I’m in Columbia. They are great resources, and good professors [who] truly care about their students, too. 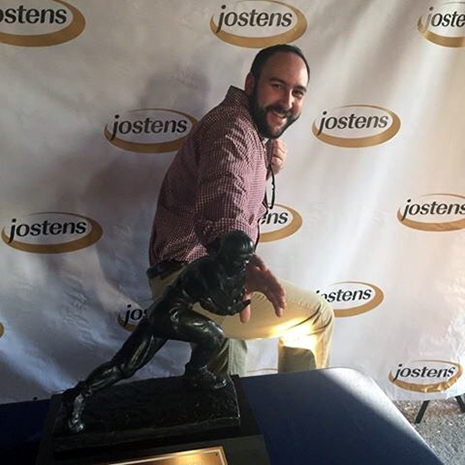 “I would be lying if I said I never produced some easy story on a Friday night after a long week as a reporter just to get through. I’d also be lying if I said there wasn’t a single day I cut out of work a little early after working 15 hours the previous day at ESPN. Teaching is different, though. You can’t mail it in. Kids see right through that.”