What exactly do journalists do? How can their efforts influence policy or make a positive difference within their communities? This profile is part of a project by students at the University of South Carolina School of Journalism and Mass Communications to explore the humanity of journalists, highlight the impact of their work and advocate for the profession’s value.

From football to baseball to everything in between, Razorback fans in Northwest and Central Arkansas religiously follow their local college sports team, the University of Arkansas Razorbacks. Alyssa Orange is an anchor for Pig Trail Nation, a news station dedicated solely to Razorback athletics. With more than 25,000 followers on Twitter, reporters at Pig Trail Nation work around the clock to provide the latest updates for fans.

Orange has always loved sports. Growing up in Richmond, Virginia, her father worked in local television, meaning she spent much of her childhood in the newsroom. In high school, she decided to combine her love for sports and television to become a sports journalist.

Telling the stories of student athletes, coaches and others connected to Razorback athletics may seem like nonstop fun, but Orange says she routinely faces criticism for what she does.

“Because we specifically cover the Razorbacks, we battle with viewers expecting us to be ‘cheerleaders’ of the programs we cover,” she says. “Fans think we are either too biased or too critical.”

Even though Orange covers a specific team, she strives to approach each story with objectivity. The university, she says, understands that she will, at times, be critical because it is her job to report fairly.

“The most important thing to do is to remain consistent and true to our integrity as sports reporters,” she says.  “It’s not personal.” 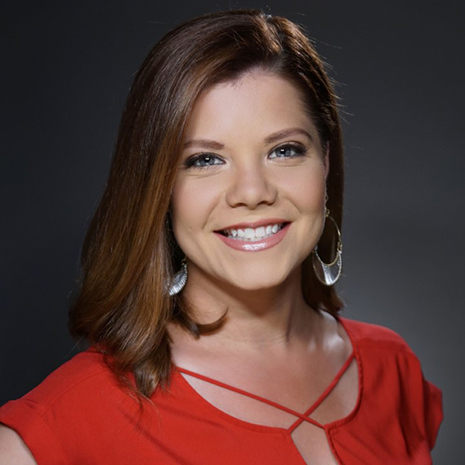 Orange is an anchor for Pig Trail Nation and has enjoyed covering events such as the 2016 and 2017 Super Bowls and the 2018 College World Series Championship.

Her favorite interviews have been with big names such as Bobby Bowden, Jerry Jones, Eduardo Perez, Tom Hart and Dave Van Horn.