Ten years ago, Andrea Hickerson joined the faculty of a brand-new journalism program at a time when even well-established schools were struggling to adapt to mounting turbulence within the industry. The key to success, she discovered, was collaborating across disciplines.

“I learned that I could interact with people in business or photography or computer science in ways I hadn’t really thought were possible,” Hickerson says.

Now, she’s bringing her innovative leadership style to the University of South Carolina as the newly named director of the School of Journalism and Mass Communications. She joins South Carolina from the Rochester Institute of Technology’s School of Communication in New York, where she’s served as director since 2016.

“Dr. Hickerson has a clear vision forward for journalism and mass communication education, a well-defined understanding of the emerging role of data and technology within the field and a strong commitment to diversity,” said Tom Reichert, dean of the College of Information and Communications. “As our program nears the century mark, we know she’ll help us set the tempo and direction for the next 100 years.”

“I’m really interested in trying to learn from faculty what really excites them, what they wish they could do, and then building collaborative partnerships to make that possible,” she says.

One partnership at the top of her list is with the SJMC’s sister school, the School of Library and Information Science.

Hickerson first joined RIT as an assistant professor in 2009, shortly after the launch of its undergraduate journalism degree program.

There, she and her colleagues received three Knight Foundation grants. The first was an experiment on live-event reporting with mobile phones called "Rise Above the Crowd." The second, an effort with a professor in the Saunders College of Business, established the Digital Journalism Incubator, a program that brought journalism and technology students together to collaborate on projects and publications. The third, a winner of the Knight Foundation’s AI and the News Open Challenge, is an interdisciplinary initiative led by a colleague in the Golisano College of Computing and Information Sciences to help journalists and media forensics experts identify deepfakes, fake video and audio files generated by machine learning.

As a researcher, she focuses on how journalism routines and political communication relate to immigrant and transnational communities. Professionally, she has written for a variety of publications, including Salon, Slate and Rochester’s The Democrat and Chronicle and City Newspaper.

Though Hickerson isn’t from South Carolina, she has deep roots here. Her parents are originally from Latta, a small town in Dillon County, and her childhood was spent making trips to visit family.

“There is a familiarity with it, so it does feel like this nice little narrative arc to come back,” she says.

Hickerson’s appointment as director of the school will take effect Aug. 1. 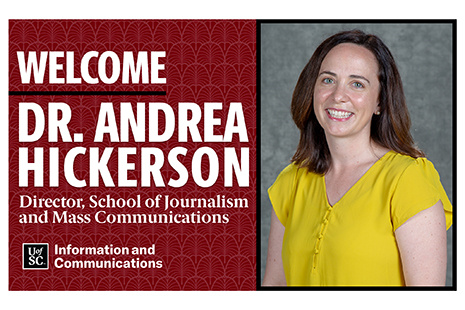