Shining the spotlight on libraries

UPDATE: MAY 13, 2019
University of South Carolina College of Education alumna Chanda Jefferson was named 2020 South Carolina Teacher of the Year at the May 8 awards gala. Jefferson is a biology teacher at Fairfield Central High School. While SLIS alumna Tamara Cox didn’t win, the state’s Department of Education confirmed there has not been another school librarian to make the top five in their records dating back to 2010.

For most South Carolina Teacher of the Year finalists, the news that they’ve made the top five comes during a surprise classroom visit from the state’s superintendent of education. But Wren High School’s Tamara Cox didn’t quite get the traditional experience. That’s because Cox isn’t a traditional classroom teacher — she’s a librarian. And she could be the first one ever to take home the state’s top honor for educators.

Cox, a 2010 alumna of the University of South Carolina School of Library and Information Science, received the good news from Superintendent Molly Spearman during a March faculty meeting in her school’s media center. Department of Education staffers told her she was the only librarian finalist in recent memory — and possibly the first one in the state’s history.

Earning the honor even at the local level is rare for school librarians, in part because eligibility rules are not determined by the state, meaning districts can choose to exclude librarians from consideration. But Cox believes it’s also because many people don’t realize the profession has evolved to keep pace with modern technology and teaching practices.

“They still picture librarians as people who check out books all day rather than recognize the amount of instruction librarians do,” Cox says.

A typical day for her includes helping students find books and complete research assignments, but that’s just the beginning. She also collaborates with teachers across a spectrum of academic subjects, providing educational resources, assisting with technology and co-teaching.

“The things you try to shoot for and learn in the library program are the things that teachers don’t learn in their educational program,” she says. “It takes a lot of effort to open their eyes to working with a librarian and how we can bring something positive to those lessons and help them carry the workload.”

Cox has worked for Anderson School District One for 14 years, but only joined Wren’s library two years ago. Since then, she’s expanded the school’s summer reading program to include more students. She also manages the program’s discussion circles and surveys students afterward to make sure the reading list hits the right notes.

She believes her job means finding innovative ways to take lessons beyond books, too. Earlier this year, she worked with Wren’s forensics teacher on a project involving Blood, Bullets and Bones: The History of Forensics, a previous South Carolina Young Adult Book Award nominee. Students read the book, had a Skype meeting with author Bridget Heos and created miniature crime scenes using textual clues from other crime-themed literary works.

“That’s kind of a fun science thing that people wouldn’t think of a librarian being involved in,” she says.

“Over and over again research has shown that a strong school library program has an indelible impact on student learning, especially for students who don’t have access to those kinds of resources outside the school day,” Green says.

The classes Cox took at SLIS played a large part in shaping her creative style of teaching, including SLIS 761: Information Technologies in the School Library Media Program with former adjunct instructor Martha Taylor. Here, a class assignment opened her eyes to the vast community of librarians sharing and seeking ideas on the internet.

“Since I’m the only librarian in the building, my online connections are a huge part of where I get ideas and inspiration and connect with librarians all over the world,” Cox says.

When Cox was announced as a finalist, that online community celebrated with her on social media, not just because they were proud, but because the recognition offers a chance for advocacy.

“Tamara being highlighted for this award is a wonderful opportunity for the state of South Carolina to recognize that school librarians are – first and foremost – teachers,” Green says.

What’s next? The South Carolina Teacher of the Year will be announced at a May 8 gala. From there, the winner will serve a year with the Center for Educator Recruitment, Retention, and Advancement traveling the state and speaking on behalf of the profession.

Win or lose, Cox hopes she can inspire each of the state’s school districts to open the contest to librarians. But if she does win, she has big plans for her visits to schools across the state.

“I’ll ask to see the library and meet the librarian and make sure the administrators know when they walk in that that is a valuable part of their school,” she says. “I want to shine the spotlight on libraries.” 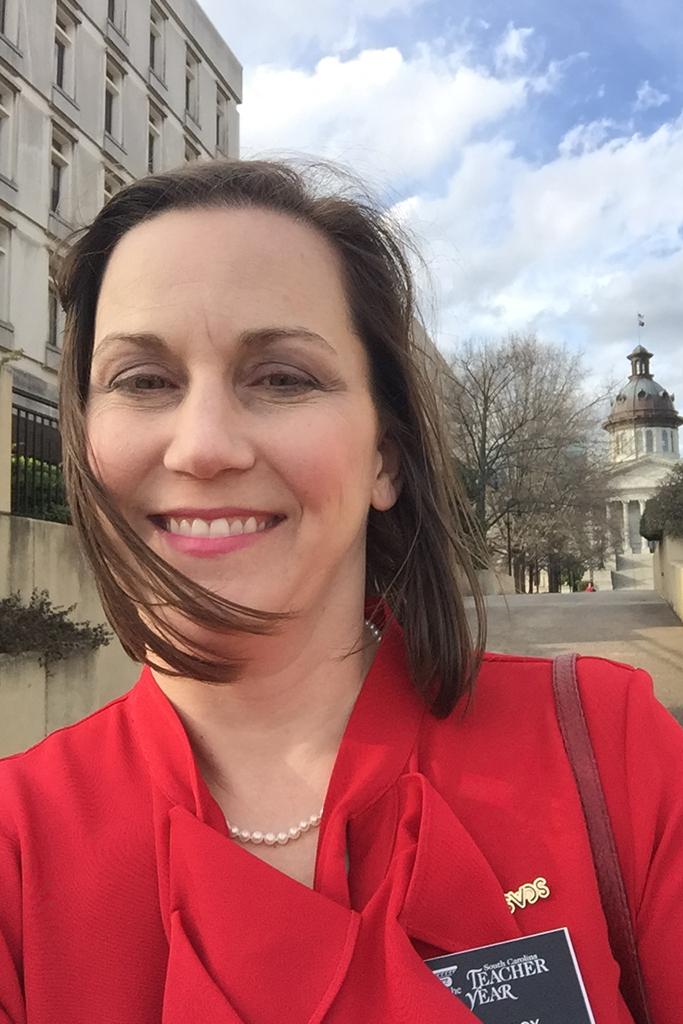 Photos of Tamara Cox at school. 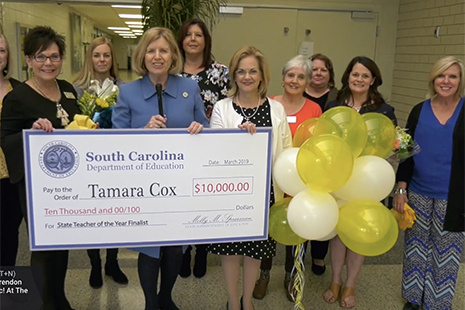 Tamara Cox announced as S.C. Teacher of the Year finalist

Molly Spearman, South Carolina Superintendent of Education, surprises Tamara Cox at school with her nomination as Teacher of the Year.