How is public trust in media evolving, and is that trend spreading into the public’s perception of libraries?

Lee Rainie, director of internet and technology for Pew Research Center, explored recent research on these questions and others at the 2018 Deans' and Directors' Lecture on Thursday, April 26.

Though Rainie now works for the self-identifying “fact tank” Pew Research Center, he has an extensive background in journalism as a previous managing editor of U.S. News & World Report. His discussion, titled "Trust, Truth and Democracy,” was tailored to both journalists and librarians, a perfect fit for audience members from the School of Library and Information Science and its sister school, the School of Journalism and Mass Communications.

His presentation coincided with the release of a new Pew report earlier that day and featured some of the new data. Topics covered included how ideological beliefs shape which media outlets are trusted and distrusted for political news, and what Pew findings reveal about fake news, including statistics on how many U.S. adults have knowingly shared it online.

Rainie explained that, while trust in the media has declined, Pew research indicates that it can vary wildly between sources.

“Different people gravitate to different sources when they’re allocating their trust,” he said. “That’s what’s happening as people think about government agencies, and it’s what’s happening when people think about news sources. It’s not a uniform indictment when they say they don’t trust the media. They do trust some sources. It’s just not the totality of the media environment.”

One of the most surprising figures he shared related to the dissemination of fake news. Nearly a quarter of American adults have themselves passed along fake news to other people, and 14 percent of people have shared news that they knew to be fake.

The presentation also examined how people identify themselves politically, and how that has evolved over time.

“The parties essentially have ideologically purified themselves,” Rainie said, pointing the audience toward graphs that illustrated a dramatic increase in political polarization from 2004-2017. “People are now more consistently liberal or more consistently conservative than they used to be.”

As for libraries, Rainie said those have have held steady as one of the most trusted professions, along with nurses and firefighters. In fact, he said, data indicates most people would be devastated if their local library closed, even if they were not personally dependent on it, because they feel that libraries “level the playing field.”

“They are so proud that libraries are serving people who don’t otherwise have the resources that the well-off have to get what they need and to have problems solved,” Rainie said.

Data also shows that libraries’ transformation into technology hubs has been well received by the public, particularly younger generations.

So what does the future hold for truth? According to a Pew survey of experts, including technologists and scholars, there’s no clear answer.

But he pointed to emerging technology – including IBM’s Watson computer – as a possible solution.

“Maybe that’s the future – they cyborg future,” Rainie said. “Where artificial intelligence is awesome at a lot of things and gets you a lot of the way toward the correct answer.”

The awards ceremony began with the initiation of students into Beta Phi Mu, the library and information science honor society. Inductees were selected based on character, academics and professionalism. The initiates were:

Sponsored by LISSA, this award honors individuals who go above and beyond what they need to do for everyone at the school.

This award honors an outstanding undergraduate student in the school. This is the first year this award has been given.

This award honors a student who has made exemplary contributions to scholarly research.

This award recognizes an individual who has made exceptional contributions to the school at large through a sharing of their time and expertise and is an outstanding representative of the profession, the school and the university.

This annual award is given to a students with outstanding potential in the field of library and information science. This award is presented to a graduate from the previous year's class based on the entirety of the student experience including grade point average, quality of class participation  and the ability to assimilate information and pass it on.

Given annually to an outstanding student leader.

This award recognizes an individual who has made significant contributions to the school and  whose career reflects a commitment to excellence and dedication to the advancement of the profession. 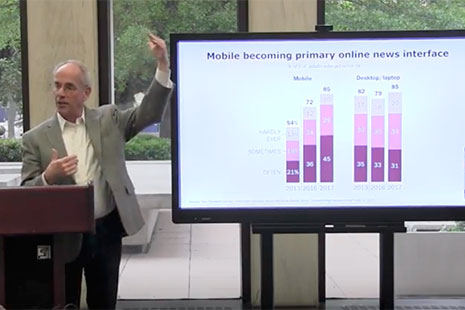 Lee Rainie, director of internet and technology for Pew Research Center, delivered the 2018 Deans’ and Directors’ Lecture on Thursday, April 26, at the South Carolina State Library. His presentation was “Trust, Truth and Democracy.” View photos from the awards ceremony. 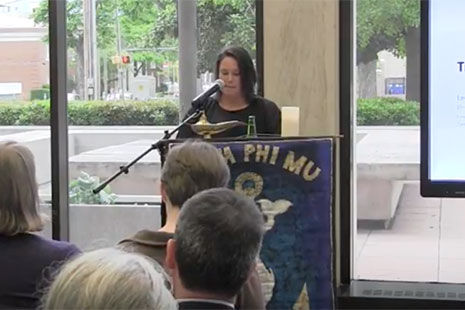 The 2018 Deans’ and Directors’ Lecture on Thursday, April 26, included the awards ceremony for the School of Library and Information Science.