Megan Plassmeyer considers herself a people’s person. And for her, that title comes with great responsibility.

Plassmeyer graduated from the University of South Carolina with a public health degree in December 2016 and started her job as community engagement coordinator of the Women’s Rights and Empowerment Network (WREN) in January 2017. Her position incorporates the communications and advocacy work Plassmeyer has been doing since her early days at USC.

“Initially, as I started being an advocate, I didn’t really know that advocacy was going to be something that was so crucial to my career path,” Plassmeyer said, “but as someone who’s a people’s person, and who’s vocal, it became very evident to me that it’s important to make sure that other’s people’s voices are heard besides mine. We can’t just hear from those traditionally in power or in view of the media.”

A large part of Plassmeyer’s role at WREN is to educate herself on crucial South Carolina women’s health issues and the policies WREN hopes to implement. The rest of the time, she’s out in the community talking to nonprofit and corporate partners, gaining their support in pushing legislation and elevating community voices.

It might seem like a far cry from editing the student newspaper at J.L. Mann High School in Greenville. But Plassmeyer’s experiences attending SCSPA and SIPA conferences actually helped push her toward a major in public health and a career in advocacy.

“I think both conferences greatly enhanced my comfort when it came to interpersonal communications,” Plassmeyer said. “And I think I transitioned into public health because after being in that journalistic setting and frequently being in a position where I was writing about all of the issues in our community, I wanted to put myself more in a position where I was actively changing it.”

Plassmeyer is still learning the ropes of her new position at WREN, a nonprofit formed in July 2016 but built on a decade-long legacy of education and advocacy initiatives carried out through the grassroots coalition Tell Them and the South Carolina Coalition for Healthy Families. Whether she’s writing a blog post or meeting with community members, Plassmeyer relies on her journalistic background to help her along the way.

“Definitely the biggest translation is in those conferences and in journalism itself, you have a ‘question everything’ attitude,” Plassmeyer said. “You have to ask the right questions, and you have to be comfortable not just taking things at face value, but going deeper and investigating.

“I feel like that’s translated to my career especially being in a social justice role, to dig a little further and see what I can do with that information to change the status of things.”

Plassmeyer came to USC for its public health program, but she said her familiarity with the campus through SCSPA and SIPA helped make it an easy decision.

“USC was the only school in state that offered the program I wanted, but I also had this renowned comfort with the school,” she said.

She advises scholastic journalists to get as involved as they can.

“For me, even though I didn’t decide to go the full journalistic route, the skills and people I met made a profound impact on my abilities to write and to engage and question things,” she said. “I even use those skills now.”

Plassmeyer looks forward to continue developing as an advocate, informing and providing a platform for South Carolina women.

“Everyone’s a really good advocate if we can just get them to take that first stop, when people are provided with the right tools and right information,” she said. 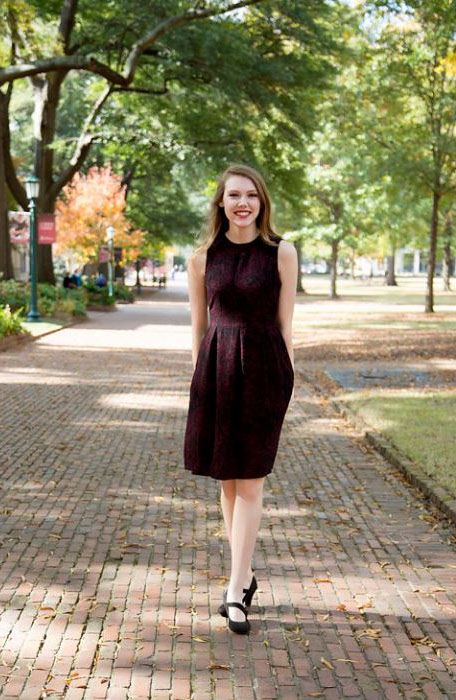 "The best part about [working at WREN] is that I'm definitely passionate about the issues we're working with, so it greatly combines something I'm passionate about with what I define as one of my greater strengths."