Student veterans at the University of South Carolina got some much deserved attention Monday with the help of some furry friends. The school’s Student Veterans Association teamed up with a group of public relations students to host “Vets and Pets.”

Military veterans and their families got a chance to cuddle and socialize with some dogs, while also learning more about the student organization that hopes to bring awareness about servicemen and servicewomen studying at the university.

“We want to grow their membership base and bring awareness to veterans on campus in general and their transition from military to student life,” said senior PR student Beth McNamara.

Vets and Pets was supported by the Palmetto Animal Assisted Life Services, or PAALS, a local non-profit, who supplied the dogs.

Nicola Borsellino, an instructor with PAALS, said the event not only allows veterans to interact with pets, but can serve as a training opportunity for dogs. He brought along Nicki, a one-year-old Golden Retriever/Labrador mix to Vets and Pets.

“PAALS is all about being involved with any organization that helps out veterans and anyone who is part of the military,” said Borsellino. “We’re always training all of our dogs to work as PTSD service dogs.”

The event is part of a month-long campaign developed by the students on the Bateman team who compete in a national public relations competition to test their classroom skills.

The Bateman team is a class students in USC’s public relations department can take in their senior year. The students who form the team compete each spring at the national level as part of the Public Relations Student Society of America Bateman Case Study competition.

PRSSA selects a different cause or organization each year upon which Bateman teams across the nation build a campaign. This year was the national non-profit Student Veterans of America. USC’s public relations campaign was designed to help the student chapter solve problems it may have communicating its message on campus.

Senior PR student Isabel Posada said the main issue for USC’s chapter was that students and faculty had no clue the group founded in 2012 existed.

Dani Goodreau, president of SVA, said the USC chapter serves about 1,200 veterans or children and spouses of veterans who use GI-Bill benefits each year, according to data from the school’s Student Success Center.

The student PR team developed a focus group and survey to learn whether the campus community knew much about student veterans. Results found that people on campus want to support veterans, but were not aware of how to help.

The senior-level PR students devised a multi-faceted plan that focused on social media, student-led events and organizational redesign to raise the SVA’s profile at the university.

The Bateman team also took over the Student Veterans Association’s Twitter and Facebook pages, and recreated their Instagram pages. Members of SVA encouraged people who came to their events to pose with the association’s logo to snap photos and post them on social media.

The students also redeveloped the organization’s meeting structure to make sure student veterans were getting the information they need about what resources at the bursar’s office, the health center and student success center are available on campus to assist them.

The Bateman team also discovered that veterans sometimes struggled to transition from military to student life. Student veterans tend to be an older demographic than the regular student population, Goodreau said, and relate differently to younger classmates who may be fresh out of high school.

The youngest veterans are often in their late 20s, but they can go up to 50 years old, she added.

Courtney White, a five-year veteran and former sergeant in the United States Marine Corps, said veterans often deal with shifting from having a sense of camaraderie with others to being in a more carefree environment.

“For me, it was going from somewhere where you’re so close to the people that you’re working with because you’re literally life dependent upon them and your unit was deployed together versus everyone who is kind of free-spirited, they just left home and haven’t really been in that situation where they needed to depend on everyone else that they’re with,” White said.

She worked in public relations writing for the Marines’ internal newspaper in Okinawa, Japan and did recruitment work in Atlanta, Georgia before coming to USC. White is in her second semester studying public relations and said SVA has helped her regain the brotherhood and sisterhood that she’s missed since becoming a student.

Veterans can have a successful college career, White added, if provided the resources and understanding from the rest of the campus.

“It’s very important to ensure that we’re making it possible for [veterans] to succeed,” she said. “We’re facing different challenges than we faced in the past.”

Goodreau said SVA has managed to make strides since it started three years ago.

The members put together an eight-step proposal last year and sent it to University President Harris Pastides to address issues such as making the admissions process easier, understanding mental health and mitigating problems that could lead a veteran to be sent to the university’s student conduct office.

Goodreau said the association is currently applying for a Home Depot Initiative grant to develop a lounge space on campus specifically for student veterans. MyCarolina, the university’s alumni association, is working with a former student veteran to establish the Graduate Veterans Association to put on events  and do community outreach.

“They’ll have just a little bit louder voice to reach a greater population than we can,” Goodreau said of the graduate group.

George Johnson, adjunct professor in the USC public relations department, said students work over two semesters developing the public relations campaign project. The first semester, PR students learn how to build a campaign and by the spring they apply their classroom knowledge to help a real client.

Jourdan Smith, a senior PR student, said he finds being on the Bateman team has given him an opportunity to be exposed to the public relations field through hands-on experience. He’s also learned that he has more options for public relations careers.

“Just being on Bateman team has been a very practical example of doing a public relations campaign,” he said. “Through internships, I feel like you only get to play a small role in a lot of campaigns you do, but for this we’ve all gotten to be very involved from the very beginning.”

Several veterans stopped by Monday to connect with each other and sign up for SVA. Some said the association helps them not feel so alone or different on campus.

“It helps people come together that actually have served overseas, have done anything like that, come here to meet other student veterans,” said Jacob Smith, a petty officer second class in the U.S. Navy Reserve who’s served for four years. “You’re going to run into a lot of people that have that common experience.”

The Bateman team will wrap up their public relations campaign by March 15. They will submit their case study to PRSSA by April 8 and will learn soon after whether they are one of three finalists picked. Winners will be announced in May and will be recognized at the PRSSA 2016 National Conference in October.

Beyond winning, both the Bateman team and SVA hope the campaign will build a large, diverse audience of students, faculty and staff committed to the association’s mission of helping student veterans.

“We want the campaign to be just a jumping point for them … we want to kickstart the buzz,” Sarah Markiewicz said. 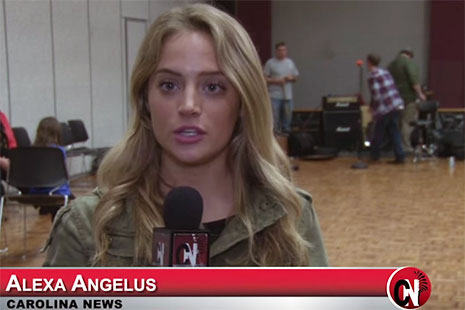 Alexa Angelus, senior broadcast journalism major, tells us how the Veterans Association and the Bateman Public Relations Team is trying to ease the transition between military life and college life.