Super Bowl, cool ads, pizza and 100 of your closest friends: Class offers credit for all

The room was abuzz with the chatter of about 100 students, some scarfing down pizza, others texting or taking selfies with friends, and a few trying to concentrate on the action as the New England Patriots and Seattle Seahawks vied for what many consider the most prestigious trophy in sports.

Then, as if some invisible hand snapped its fingers, the chatter hushed, and the students glued their eyes to the flat-screen TVs hanging in the front of the room. The game faded out, and the Super Bowl ads, the real focus of Sunday evening’s watch party at the WIS-TV news station, began.

It’s been this way for a dozen years now in professor Bonnie Drewniany’s Super Bowl advertising class at the University of South Carolina.

Students from a variety of majors – though many of them hail from the School of Journalism and Mass Communications – flock to the class every year, looking for a fun elective or to explore their interest in advertising.

Drewniany said that before she started reserving seats for advertising majors during registration, the class would fill up within five minutes.

“This is like the holy grail of advertising,” said Suzi Kutcher, a senior majoring in advertising.

Others, including fellow advertising major Grace Bennett, enjoy what they say is a relaxed class where students spend more time analyzing the best and worst examples of ads than they do in their other advertising classes.

“As far as electives go, what could be more fun than the Super Bowl?” Bennett said.

Though the Super Bowl is its main attraction, the class meets like any other throughout the semester, with students writing several reaction papers and producing two major projects – one of which gives students a chance to create an ad of their own.

It’s an ideal fit for students like Kelsey Hearn, a junior advertising major who said – cracking open a Coke can – that it’s her life goal to create a Super Bowl ad for Coca-Cola, a company whose advertisements she has admired since she was young.

Drewniany has used Super Bowl ads as examples in her classes since she began teaching advertising in the 1980s, and she hopes her class helps students think critically about commercials for the rest of their lives.

“I think after taking this course, they never look at a commercial the same way again because you really do have to understand that it is a business, that they need, ultimately, to sell product as well as to resonate with the viewers and have something that people like to see,” she said.

Just three weeks into the semester, the students – who graded each Super Bowl ad on the criteria of brand identity, likability and persuasiveness – appear to be on the right track, Drewniany said.

Coca-Cola’s “Make It Happy ” ad earned the top spot on Sunday night, earning the Cocky Award, a bobblehead the ad’s creators will receive when they speak to the class later this semester.

“I think the top picks were right on target,” Drewniany said, adding that Coca-Cola’s ad performed well in each of the three criteria.

“I think it was relevant to the long-running happiness campaign that Coca-Cola has done, and it has very strong brand ID Coca-Cola is seen throughout, so it’s a memorable spot as far as brand identity,” Drewniany said.

Posted Feb. 2, 2015
By Madeleine Collins, From The Daily Gamecock

'Ad'-ing it all up: class votes on commercials

On Super Bowl Sunday, 100 students’ voices swelled as they ate, laughed and waited for the big game to begin.

But they weren't in a bar, dorm or apartment.

“This is awesome," said Alex Grant, a third-year broadcast journalism student. "We’re sitting on the set of the WIS news station to watch the Super Bowl."

As a part of the Super Bowl of Advertising class offered by the School of Journalism and Mass Communications, students watch the game and pay close attention to the commercials, rating each based on likability, persuasiveness and brand identity.

The students were set up at fold out tables on the floor of the WIS-TV newsroom. Bonnie Drewniany and Glenda Alvarado, professors at USC’s School of Journalism and Mass Communications, sat at the news desk in referee uniforms, ready to delegate the Super Bowl Ad Poll.

Students voted for their favorite ads with iClickers, and seven large TVs were mounted throughout the room, so everyone had a clear view of the game. 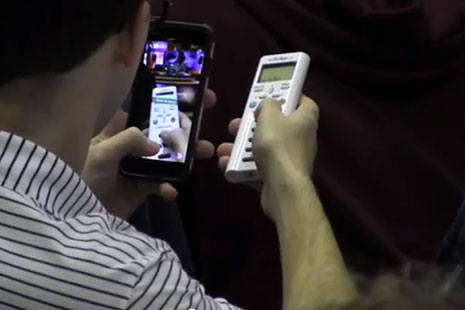 A tiny glimpse of what the night is like.

The Top 5 Ads As Chosen by the Online Poll