From the classroom to the newsroom

If you're looking for real world communication experience combined with high level, intellectually-based course work, USC's Master of Mass Communication is the place for you.

Just ask Jennifer Blencowe, an M.M.C. student in the general program of study with a focus in broadcast journalism.  Blencowe's dream job is working in a television newsroom and this area of study is helping her reach her career goal.

“The program has definitely exceeded my expectations. I thought grad school was an extension of college, but it's not. It has prepared me for a future career in the news business,” said Blencowe.

The program has given Blencowe the opportunity to take fundamental communications classes, such as Media Law and Issues in Mass Communication Management, while also working in a newsroom setting. Through the School of Journalism and Mass Communication's broadcast journalism capstone course, graduate and undergraduate students are able to be part of a news team that produces a live, daily newscast.

“The course has showed me how a newscast is run. It has given me an opportunity to learn about every role in the newsroom and that makes me more prepared to be a reporter because I understand every role,” said Blencowe.

She says the program has prepared her for her future career as an investigative reporter because she has a different job everyday in the USC newsroom. Students have the opportunity to be a producer, sports anchor, weather reporter or multimedia journalist. By experiencing all the roles in the television newsroom, Blencowe said she has learned that people in the newsroom work as a team to produce a final product.

“I'm able to have a different job every day in the newsroom and understand what each role entails. It's given me a chance to work on my news reel that will help me get a job,” said Blencowe.

Blencowe said that the M.M.C. program allows students to have the best of both worlds because she is able to take theoretically-based classes along with hands-on broadcast courses. For example, she said Media Law  “taught her the do's and don'ts in the news industry,” and Media Economics “gave her a better understanding of the stock market.”

Blencowe was recently hired by WIS-TV, the most-watched station in Columbia. She said she is thrilled to be a full-time producer in an award-winning newsroom.

“I'm going to work at all hours of the day, so I will be able to experience news that occurs all around the clock. Working at all different hours will make me more versatile. I'm excited to learn more about the news industry,” said Blencowe.

Rachel Tripp is a senior broadcast journalism major from Fort Mill, South Carolina. A recipient of the 2014 William Shafto journalism fellowship, she interned as a reporter at the NBC affiliate station WIS-TV in Columbia. She plans to graduate in May 2015 and pursue a career in sports or entertainment communications. 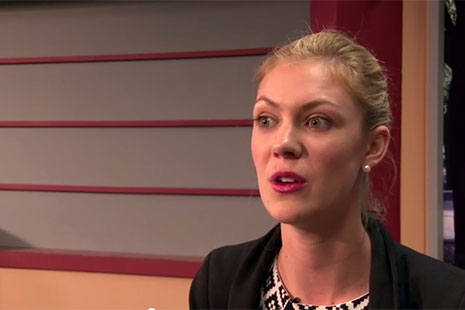 Jennifer Blencowe, an M.M.C. student in the general program of study, discusses her experience in the broadcast journalism capstone course.