Child abduction. It’s a crime that is often sensationalized by the media and one that terrifies most parents.  For many it’s a hard subject to talk about, but for Leigh Moscowitz, an associate professor in the School of Journalism and Mass Communications, it’s the focus of her latest book. Moscowitz co-authored Snatched: Child Abductions in U.S. Media, the first book-length study to examine national media coverage of child abductions in the 2000s.

“It’s certainly a difficult, terrifying and uncomfortable topic to research and write about, but an important one,” Moscowitz said. “Kidnapping stories that attract national media coverage are about much more than just the crime itself. They shape our cultural understandings of childhood and communicate important social lessons about parenting, community, safety and danger.”

Moscowitz kicked off a promotional tour for the book with a lecture to students and faculty in the multimedia room of the newly renovated School of Journalism and Mass Communications.

During the talk, Moscowitz discussed the lopsided coverage of child abduction cases that received the most news coverage in the 2000s. She argued that the media tend to exclusively cover cases involving the disappearance of young, middle-to-upper class white girls, even though such crimes are statistically rare and on the decline. Research in the book also focuses on the sensationalized coverage that often blames victims of long-term abductions for failing to escape from their captivity. Moscowitz also discussed how news coverage has evolved by tracing the history of child abductions in the media throughout the decades, ranging from the 1920s to the 2000s.

Research on the project, which was a collaboration between Moscowitz and co-author Spring-Serenity Duvall, associate professor of communications in the Department of Communications at Salem College, began more than 10 years ago. The two met while earning their doctorate degrees at Indiana University.

“It was important for us to track and analyze media coverage over time so we could show how the news framing evolved,” Moscowitz said. “This approach allowed us to investigate a decade of time in which both cultural anxieties and media coverage were quite high, even though the number of actual cases of missing children was quite low.”

Moscowitz will travel with Duvall across the Southeast region of the U.S. over the next several months to give campus talks about their research.

More information about Snatched can be found here.

Parker King is a junior broadcast journalism major, and sports and entertainment minor from Norfolk, Virginia. For the past two summers she has worked as a production technician for WTKR-TV, and is an active member of Chi Omega Fraternity. 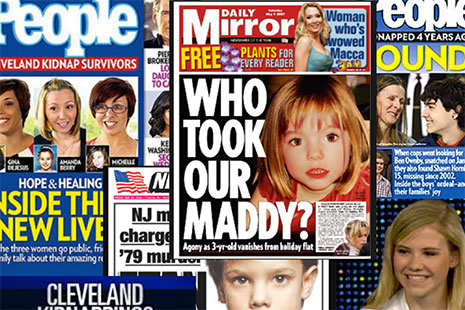 "An interdisciplinary eye-opener, grounded in the fields of childhood, media, gender, and cultural studies, ‘Snatched’ offers a careful analysis of one of the most daunting moral panics of our time. But the book goes well beyond that specific social concern - it uses it as a lens for understanding age, race, and gender hierarchies within our society and culture, and the journalistic practices of telling us stories about them. An original, engaging, intellectually illuminating, and socially nuanced analysis supported by vivid illustrations of parents’ worst nightmare’ that will enrich the bookshelf of anyone who cares about children, families, and the world around them." Dafna Lemish, Dean, College of Mass Communication and Media Arts; Founding Editor of the ‘Journal of Children and Media’

"Scholars and students interested in moral panics, cultural narratives, and news will find a fascinating read in ‘Snatched.’ ... The book highlights the racial, gendered, and classed disparities in news coverage as it questions the ethics of journalism that sensationalizes and capitalizes upon missing children." Carol M. Liebler, Professor, Department of Communications, S. I. Newhouse School of Public Communications, Syracuse University