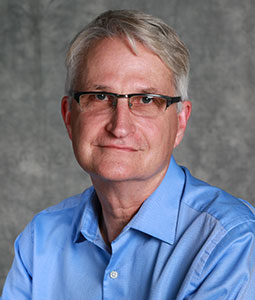 Scott Farrand has more than 20 years of professional experience in visual communication. During the early 1980s, he was busy pioneering the use of Macintosh computers for print publications. He beta-tested and helped develop the first versions of Adobe Illustrator and Freehand drawing programs for the Macintosh. He also created and published one of the first informational graphics using an Apple computer.

Farrand's expertise is publication and print design, visual communication and informational graphics. During his career, he has received state, national and international honors for design work and informational graphics. In 1996 he accepted, for The State newspaper, the Society of Newspaper Design's highest honor for the "Best Designed Newspaper in the World."  Currently his research and work is in the areas of convergence journalism and multimedia visual communication.

Farrand believes in integrating theory, technology and real-world experiences into all of his classes. He is known to bring real clients into his class for students to solve their communication problems. His is the recipient of two Mortar Board awards for teaching excellence. Farrand teaches Intro to Visual Communication, Graphics for Visual Communication, Informational Graphics, Capstone Portfolio Development and Capstone III for the journalism sequence. He also teaches study abroad classes during the summer for the college that have gone to Germany and recently to Africa.

Farrand and advertising associate professor Karen Mallia have created and conducted the CreateAthon at the University of South Carolina. This is a unique event that takes the best creative students at the university and gives them 24 hours to solve the communication needs of a nonprofit in South Carolina.

Scott Farrand is also the University of South Carolina faculty adviser for the Garnet & Black student magazine. He also works with and advises the Daily Gamecock student newspaper on campus.

Farrand has begun taking up the sport of running and is an active Run For God participant who runs in several competitive races yearly.

Reporting live outside our newsroom
At an extraordinary moment in American history, Carolina News & Reporter students rise to the challenge of reporting from far-flung places.