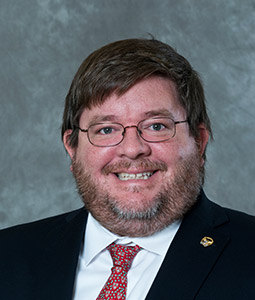 Daniel Ostergaard is a clinical faculty member of the Sonoco International Business Department in the Darla Moore School of Business with expertise in public-private partnerships, business-government relations, critical infrastructure, security, cybersecurity and extensive diplomatic and multinational corporate dealings around the world. Ostergaard joined the Moore School in August 2010 after serving in a variety of roles in both the public and private sectors. He also served as the director for the Master of International Business program and has conducted business and diplomacy in 77 countries throughout the world.

His research is focused on public-private partnerships and how hybridization of firm/government arrangements create sustainable competitive advantage. His research interests also include international security, transnational terrorism and trade.

In December 2020, he was named as one of the Top 50 Undergraduate Business Professors in the world by Poets & Quants. In addition, he has received numerous awards for his teaching including the Moore School’s top Alfred G. Smith Teaching Award, Outstanding Graduate Student Teaching Award, the Mortar Board Excellence in Teaching Award and two Thumbs-Up Awards from the UofSC Office of Student Disability Services. He co-authored a case study on organizational behavior, which has been used extensively by the U.S. Coast Guard Academy for years, and he leads students to the Middle East each year for field study and research. He also serves as lead faculty for the Cybersecurity Management Graduate Certificate program.

Ostergaard’s experience has given him a unique perspective on the intersection of the public and private sectors. He founded two multinational consulting firms and remains engaged in international business development for both private and public sector clients. He served as the executive director (SES-3) of the U.S. Department of Homeland Security’s Advisory Council and as a liaison on behalf of the Executive Officer of Governor Jeb Bush and the Florida Department of Law Enforcement in Washington, D.C. Ostergaard also served 11 years of active duty in the U.S. Coast Guard, where his leadership was recognized early when he was given command of a ship and shore station at the age of 23.

He was elected to a municipal office in Washington, D.C.; founded and ran an organic cattle ranch dedicated to rescuing several endangered species of domestic livestock; and coached youth soccer for 10 seasons. He is an active assistant scout master for the Boy Scouts of America, a board member on several boards and a semi-competitive BBQ smoker (western Carolina style).

His teaching style blends the theoretical with his extensive real-world experiences.