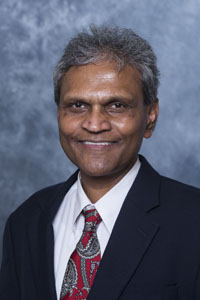 Sanjay L. Ahire is a Professor of Global Supply Chain and Operations Management (GSCOM) at the Darla Moore School of Business at the University of South Carolina. He is also the Co-Director of Operations and Supply Chain Center. He heads the Sonoco-USC Lean Six Sigma Green Belt Certification initiative at the Darla Moore School of Business. Ahire holds a Ph.D. in management science from the University of Alabama (1992). He also holds a master’s degree in management studies (1985) and a bachelor’s degree in chemical engineering (1982), both from the University of Bombay (India).

Ahire has published several research articles in various leading journals, including Management Science, European Journal of Operational Research, Journal of Operations Management, Production and Operations Management, Decision Sciences and IEEE Transactions on Engineering Management. His research has been well-cited and used by researchers and practicing managers. As of February 2017, Ahire’s research papers have accrued more than 4,700 citations. One of his articles on quality management has accrued more than 2,000 citations in scholarly literature (scholar.google.com) and is one of the most cited research papers in operations management. He also has published seven refereed articles published in Interfaces, the flagship applied research/consulting scholarly journal of INFORMS, based on his consulting work with GE, Wal-Mart and others.

Ahire is also an accomplished teacher of operations improvement strategies and techniques. He received the 2002 Wickham Skinner Award for Teaching Innovation Achievements from the Production and Operations Management Society, the 2005 Teaching Excellence Award from the University of Dayton, the 2005 Teaching Excellence Award from the Southwestern Ohio Council on Higher Education and the 2015 Alfred Smith Award for Best Professor of the Darla Moore School of Business and the university-wide 2015 Michael J. Mungo Undergraduate Teaching Excellence Award, both from the University of South Carolina. These awards are based on his ability to link teaching and students in his operations management classes with real-world consulting projects in a wide range of manufacturing and service firms. In the 2005 INFORMS annual conference, Ahire was a finalist in the prestigious Harvey Wagner Prize global competition for operations research consulting for his consulting work on inventory optimization with GE consumer products. He was nominated by the University of South Carolina for the national US Professor of the Year Award (Council for Advancement and Support of Education; Carnegie Foundation for Advancement of Teaching) for 2015.