Whenever public relations instructor Kelly Davis steps into her office at the School of Journalism and Mass Communications, she can’t help but look over at her tall bookshelf of picture frames.

Those frames hold photos of lifelong friends that Davis met through the Public Relations Society of America and the Public Relations Student Society of America. Those people and the relationships with them are what inspired Davis to become the faculty advisor for USC’s PRSSA. Today, she works one-on-one with students to help shape them to become professionals in the communications industry.

“One of the things I really loved about working with PRSSA with the national committee is how much of a family those groups are,” she said. “They weren’t just people who were on a board together for a year, they really jelled as families and they still are three, four years out from their time serving in these roles together.”

Davis has over 20 years of experience in the public relations field.

Her first job out of college was at BlueCross BlueShield of South Carolina, where she was a communications and special projects coordinator. From there she served as the public relations director at several major businesses and nonprofit organizations and eventually founded her own agency, Davis Public Relations and Marketing LLC in 2004.

But what has been a defining moment of her career was becoming a member of PRSA and that’s because it led her to her position today. About five years ago when she was serving on the PRSA national board of directors, she was assigned to be the board liaison to the PRSSA national committee. After that one-year term, another opportunity came forward and she applied to be the national professional advisor to PRSSA where she worked with students in PRSSA chapters all over the country.

“I really got to know the national headquarters staff in New York and it really opened my eyes to what we could be doing at the chapter level,” Davis said.

Sitting in her office, she looked up at a little forest of palmetto tree trophies that represent much of her career and her life. She paused for a moment to think about how much the awards mean to her. Davis has earned over 50 awards, mostly from her work in PR and from the South Carolina chapter of PRSA, but she only brought a sampling for her office. She said some of her most prominent awards are the Distinguished Practitioner of The Year and Rookie of The Year.

As the faculty advisor to PRSSA, Davis oversees the standards and goals for the chapter and the students.

She says that even though the chapter has more than 100 members, she expects students to continuously attend meetings and be engaged.

“I am a big believer that there’s a place for everybody who wants to serve,” Davis said. “The more that people feel like they have a place and they’re involved and they’re engaged, they’re going to get so much more out of it. That really benefits the chapter.”

Davis has high hopes for USC’s chapter and wants it to continue growing.

“It’s a big goal for us to eventually host a regional conference one day and to have the experience of putting it together and inviting PRSSA members from other schools to participate,” she said. “I think that would be a neat experience for our chapter.”

Davis said that the most difficult part of having a career in public relations is that it is changing rapidly and all the time. So, Davis advises members of PRSSA and non-members to make sure they’re keeping up with the changes.

“It really is about being constantly curious about the profession and seeking out the resources to learn about it and to engage with professionals,” she said.

As the advisor, Davis sets standards and goals, but says it is sometimes difficult to remember that PRSSA is a student-run organization.

“Some of my fellow advisors say that the hardest part is sometimes you do have to let students fail just a little bit,” she said. “I do try to keep that spirit in mind, that I’m here to be a resource and provide some insight, but ultimately I want students to really have the ownership of how this organization goes.”

After all of Davis’s experience and contribution to the public relations industry, she remains humble and contributes PRSSA’s success to the students.

“It really all comes back to the students and people seeing the vision for what we can be as an organization and sharing that excitement with their peers,” she said. “There’s only so much that I can do as an advisor, but students have to see that coming from other students to want to really be involved. We have had great leadership through the years.”

Pointing back to her shelf of photos, Davis emphasized that the most rewarding takeaway from being a part of PRSSA is the relationships.

“When I look at some of my closest friends, they are people I met through PRSA and PRSSA,” she said. “I want that for all of you. I’m hoping to paint that vision for our students. This is not just a club on campus, you are part of a truly global network.”

Samantha Custer is a senior public relations student and serves as the project manager of the 2020 Bateman team. After graduation, she hopes to work in the influencer marketing division of a major agency in Los Angeles. 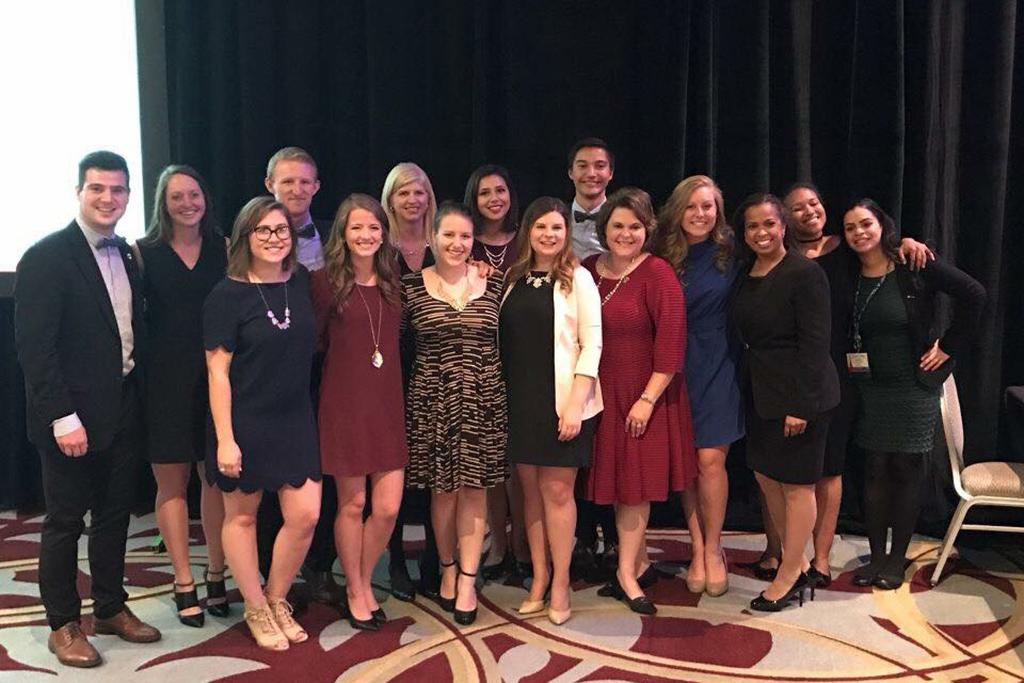