The “Dot Buys a Bike” book tour kicked off at A.C. Moore Elementary on Tuesday, Nov. 15. Faculty and staff members in the College of Information and Communications produced the book to help children develop their ability to discern truth in online videos, photos, and social media posts.

“Children are being exposed to a variety of media at a young age, and they need to be able to distinguish between truth and misinformation,” said Christine Shelek, executive director for the South Carolina Center for Community Literacy. “That’s why it was important to our college to produce a book like this.”

The book is targeted towards students in third grade, but children from kindergarten through fifth grade can benefit from its messages about verifying information and not accepting all content as accurate.

To make the book launch engaging for a large group of students, staff members at Cocky’s Reading Express developed a play based on the ideas presented in “Dot Buys a Bike.”

In the book, a rumor about Dot buying a red sports car instead of a bike begins to circulate around town. During the play, the children would call out “Did you hear about Dot the chicken?” each time Valerie Byrd Fort, coordinator for Cocky’s Reading Express, held up a cut out of the red sports car.

Illustrator Marius Valdes also spoke with the children during the event. He showed them sketches he made as he was planning the illustrations for “Dot Buys a Bike.” He also told them that every time a bike appears in the book it is based on a photo of his own daughter riding a bike.

A.C. Moore was chosen as the location for the launch of the book tour because it has a large mural in its media center that was painted by Marius Valdes and has a similar style to the illustrations in “Dot Buys a Bike.”

Contributions from alumni, staff and other community members during the 2019 Give for Garnet campaign covered a portion of the production costs for “Dot Buys a Bike.” Cocky’s Reading Express will provide a copy of the book to each school the program visits this year.

Copies of the book can also be purchased through the University of South Carolina Marketplace. 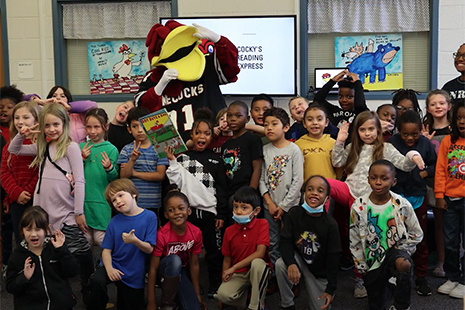 "Dot Buys a Bike" was launched to a group of second grade students at A.C. Moore Elementary School in Columbia. 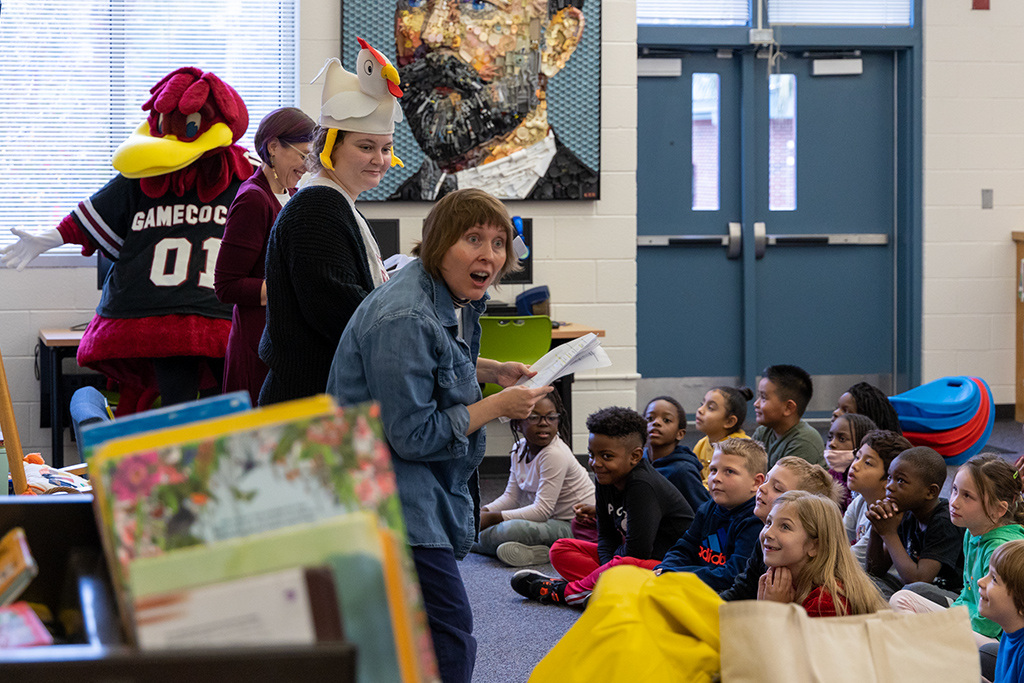 View images from the book launch.