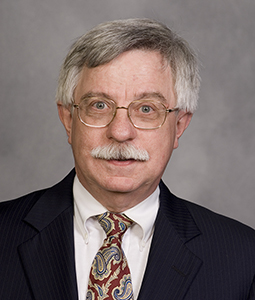 Dennis Nolan was born in Milwaukee, Wisconsin in 1945. He received an A.B. degree in Government from Georgetown University in 1967, a J.D. from Harvard University in 1970, and an M.A. in American History from the University of Wisconsin-Milwaukee in 1974. Following his graduation from law school and admission to the Wisconsin bar, he practiced labor law for two years with Foley & Lardner in Milwaukee, Wisconsin. He spent two more years as Legal Advisor to the Deputy Under Secretary of the Army, for whom he worked on treaty negotiations, labor law, and environmental law matters.

Professor Nolan has published eight books and forty-five major articles and chapters on labor law, labor and employment arbitration, and legal history. He has delivered nearly a hundred and fifty papers and lectures in his specialties, including conferences and lecture tours in Australia, Canada, Greece, Ireland, New Zealand, and the United Kingdom.

Professor Nolan has maintained an active arbitration and mediation practice since 1976. He serves on the labor arbitration panels of the American Arbitration Association and the Federal Mediation and Conciliation Service, as well as many private panels. In 1985, his peers recognized his work as an arbitrator by selecting him for membership in the National Academy of Arbitrators. He has served in many leadership roles for the Academy, culminating in the Presidency in 2006–07. His other professional associations include the Association of American Law Schools (Chair of the Section on Labor and Employment Law, 1990–91), the International Society for Labor Law and Social Security (National Executive Board, 1995–present), the Labor Law Group Trust (Executive Board, 2002–2010), the National Association of Scholars, the Society of Federal Labor Relations Professionals, the South Carolina Bar (Associate Member, 1974–2012, and founder and former chair of the Section on Employment and Labor Law), and the State Bar of Wisconsin. In October of 2002, President George W. Bush appointed him to the Presidential Board of Inquiry on the Work Stoppage in the West Coast Ports.