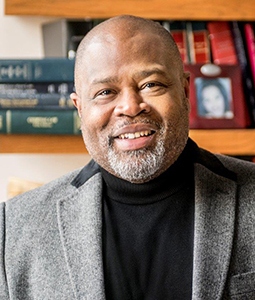 Professor Kevin Brown joined the faculty of the University of South Carolina School of Law on June 1, 2022.  Before that, he had been on the faculty of Indiana University Maurer School of Law since 1987.  In 1978, Brown graduated with distinction from the Indiana University Kelley School of Business where he majored in Accounting.  Brown graduated from Yale Law School in 1982.  After graduation, he joined the Indianapolis law firm of Baker & Daniels (now Faegre Drinker Biddle & Reath LLP) until 1987.

Brown was an original participant in both the first Critical Race Theory Workshop held in Madison, Wisconsin in 1989 (as well as the next four annual workshops) and the first People of Color Conference held in Chicago in 1991.  For over 35 years his primary research interests are in the areas of race, law and education and the global impact of the African-American struggle.  Brown has published over 80 articles or comments on issues such as critical race theory, school desegregation, affirmative action, African-American Immersion Schools, increasing school choice, the impact of the African-Americans on anti-apartheid struggle in South Africa, and the inspiration the 250 million Dalits in India have drawn from African-Americans.  Carolina Academic Press published his 2005 book, Race, Law and Education in the Post Desegregation Era and his 2014 book, Because of Our Success:  The Changing Racial and Ethnic Ancestry of Blacks on Affirmative Action.  His chapter entitled "The History and Conceptual Elements of Critical Race Theory," is the first chapter in the Handbook of Critical Race Theory in Education.  A frequent speaker at scholarly conferences, Brown has spoken on issues of race, education, diversity, or the global impact of African-Americans over 300 times including at the annual Convention of the NAACP, the Congressional Black Caucus Braintrust Meetings, the National Bar Association, the National Summit of Black Women Lawyers, the American Bar Association,  the Justices of the Indiana Supreme Court, and the High Commission of India in London; at several leading law schools and universities including Harvard, Columbia, NYU, Vanderbilt, Virginia, Duke, Cornell, Emory, Northwestern, UCLA, and Texas; and several overseas institutions including at Oxford University, the University of Mumbai, University of Kasel, Jawaharlal Nehru University, Al-Quds University outside Jerusalem, Jindal Global Law School, and the School of Oriental and African Studies of the University of London.