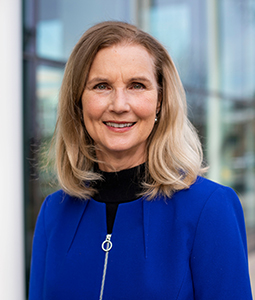 Donna K. Arnett is the executive vice president for academic affairs and provost at the University of South Carolina, and an internationally recognized genetic epidemiologist specializing in the genomics and pharmacogenomics of cardiovascular disease.

Dr. Arnett received her Ph.D. in epidemiology from the University of North Carolina (UNC) at Chapel Hill after receiving her Master of Public Health and bachelor’s degree in nursing from the University of South Florida. After completing her postdoctoral training at UNC, she was hired as an assistant professor at the University of Minnesota, where she rose to the rank of professor and was named the Mayo professor of public health, an endowed chair in the Division of Epidemiology and Community Health. In 2004, Dr. Arnett became chair of the Department of Epidemiology at the University of Alabama at Birmingham (UAB). She also served as associate dean for academics and strategic programs in the UAB School of Public Health from 2014-2015. From 2016-2022, Dr. Arnett led the University of Kentucky College of Public Health as dean, before joining the University of South Carolina’s leadership team as EVP for academic affairs and provost. Dr. Arnett has published more than 700 peer-reviewed papers and two edited volumes, and she had 25 years of continuous NIH funding. She has been named a World Expert in hypertension, body mass index and genetic polymorphisms by Expertscape, a recognition earned by being in the top 0.1 percent of scholars writing about these topics over the previous ten years. She also served as the national president of the American Heart Association, where she became the first epidemiologist to serve in that role.