On December 5, 1776, a group of young men, students of the College of William and Mary in Virginia, meeting in the Apollo Room of the Raleigh Tavern, Williamsburg, formed the Phi Beta Kappa Society, which they dedicated to high purposes with eighteenth-century eloquence. Establishment of New England branches at Yale in 1780 and at Harvard in 1781 ensured the perpetuation and propagation of the society. During the following half century four more chapters were founded: at Dartmouth in 1787, Union in 1817, Bowdoin in 1825, and Brown in 1830. Then after a pause of fifteen years a slightly more rapid expansion began in 1845. At the end of the next half century of growth twenty-five chapters had been founded. The need for a closer unity and greater uniformity of practices led, in 1883, to the organization of the national body, the United Chapters of Phi Beta Kappa.

In 1875 the society extended the privilege of membership to women. In 1926 the one hundred fiftieth anniversary was made the occasion for raising an endowment fund and for exploring ways of encouraging scholarship in the educational institutions of the country. The University of South Carolina chapter of Phi Beta Kappa, Alpha of South Carolina, was installed by the United Chapters of Phi Beta Kappa on April 8, 1926. More recently the National Chapters of Phi Beta Kappa have joined in the defense of freedom of teaching and inquiry and of the liberal ideal of education.

The original organization at William and Mary was a secret society, and the oath transmitted to the first six branches contained a promise to "preserve inviolate the secrets of the same." In the 1830s most of the branches followed the lead of the Alpha Chapter of Massachusetts and repealed the injunction of secrecy. They retained, however, the medal or key with its symbolic engraving, and the interpretation of these symbols and other "signs" of the society has continued to constitute a part of the form of initiation.

The present standard key, except for its smaller size and for the lower stem added by the branch at Yale, is substantially the same as the original model of the Alpha of Virginia. On the obverse the medal bore the Greek letters Phi Beta Kappa, the initials of the Greek words translated as "love of wisdom--the helmsman of life." In the upper left corner three stars symbolized the aims of the society: friendship, morality, and literature. A pointing hand in the lower corner symbolized aspiration. On the reverse the letters, S P, represented the second motto of the society, Societas Philosophiae. Below them was engraved the historic date December 5, 1776, and above them the name of the member was sometimes inscribed.

The "signs" of the society which tradition has preserved are two. When members met, they greeted each other by drawing the backs of the index and middle fingers of the right hand across the lips from left to right, thus, apparently, affirming that their lips were sealed. They followed this sign with a secret handshake shared with new members after the initiation ceremony. 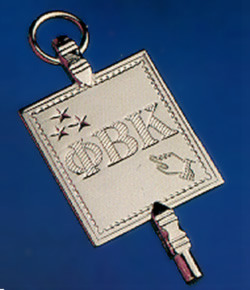 USC students who are members of PBK and would like to have their membership noted during graduation ceremonies may wear the pink and blue honor cord they will receive during the induction ceremony or they may wear the PBK key, which they can purchase from PBK, on the University's honor stole.