Responding to Fight the Bite: PREP Alumna and CDC Health Scientist defends against the Zika Virus

As an avid lover of science and all things health related, Courtney Callahan always knew from a young age that she wanted to work in the health field. It was while a junior at Winthrop University working with her zoologist professor that her interest in bacteria and viruses peaked. “I find it fascinating that the tiniest of organisms have such enormous impacts on our health and our world,” Courtney says. “Most things can be explained and better understood at the microbial level.”

Because more preparation was warranted before entering graduate school, Courtney joined the Post-baccalaureate Research Education Program (PREP) at the University of South Carolina where she gained experience and a solid foundation for graduate studies. After PREP, she was admitted to the Ph.D. program in Biomedical Sciences at the at the University of South Carolina’s School of Medicine.

After graduating with a Ph.D. degree in 2012, Courtney obtained a fellowship working at the Centers for Disease Control and Prevention (CDC) detecting incapacitating agents and fentanyls in bodily fluids. Less than a year later, she accepted a full time position working as a biologist and response team member aiding against biothreats such as anthrax and plague. Currently, Courtney’s focus has been emergency preparedness and response where she works as a health scientist.

While at CDC, Courtney has assisted with major outbreaks such as the Ebola Virus outbreak, but more recently in 2017 she has responded to the Zika Virus outbreak, where she worked in CDC’s Emergency Operations Center (EOC). As a result of her contributions in EOC laboratory operations, Courtney positively impacted the direction of the Zika Virus response by monitoring and coordinating various CDC task force teams and external laboratories.

Dedicated to public health promotion and disease prevention, Courtney continues to strive to rapidly address the many emerging public health needs on the front lines.  “If my efforts can make this world a little safer and healthier, then I have done my job,” she says. “There is much more work ahead, and I’m just getting started.” 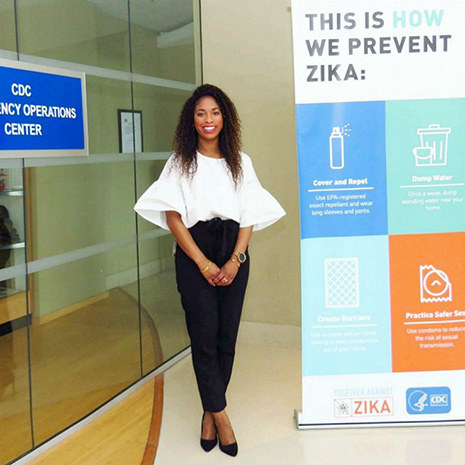 "If my efforts can make this world a little safer and healthier, then I have done my job. There is much more work ahead, and I’m just getting started.”