One element that sets the Honors College apart from the rest of the university and other honors colleges is our thesis requirement. Your senior thesis allows you to complete a substantial academic project, applying knowledge you've acquired in your course of study. You'll be able to demonstrate a practical command of research techniques and writing skills and showcase your ability to work independently.

In order to graduate from the Honors College, students are required to complete and successfully defend a senior thesis paper or project. Honors students consult with a faculty mentor and the Honors College Thesis Coordinator to plan a thesis project based on their academic and creative interests, not necessarily their major. Options include an analysis of a controversial social issue, research in an academic discipline, scientific research, a service-learning or pro bono project, and a creative project such as a play or series of short stories.

You will build up your thesis throughout your years in the Honors College by completing coursework in our diverse curriculum, participating in research, engaging with faculty and narrowing your areas of academic and professional interest. By the end of your junior year, you will have a well-developed thesis plan that you can implement in your senior year.

Many students spend their college years searching vainly for a passion without fully discovering one until much later in life. Not Samantha Crandall. The Honors College senior found not only one passion, but two early in her college years: homelessness and music.

Crandall, a soprano, combined her passions to create a unique joint senior thesis and senior recital project. “Giving Voice to the Unheard,” a recital she gave in February, included a mixture of music and lecture that presented an emotional journey of homelessness.

For those drawn to literary puzzles, 18th century Scottish poet Robert Burns offers a wealth of riddles. While he’s famous for his poems about love and friendship, a current debate in academic circles involves his beliefs about slavery. Was he or wasn’t he an abolitionist?

Joseph DuRant, a 2015 English Honors graduate, found himself intrigued by the question during his three-year research work with Patrick Scott, distinguished professor of English emeritus and editor of Studies in Scottish Literature. In 2012, DuRant began researching and editing letters written to Burns — about 500 of them, from 1779 until his death in 1796 — stored in the G. Ross Roy collection in the Thomas Cooper Library. While some were fragments and others pertained to the everyday business of farm upkeep and payment for work, the letters show a more complete side of the internationally loved poet, honored by more than 700 Burns clubs in the world.

Zach Miller knew two things about his senior thesis: He didn’t want to write a paper, and he wanted it to help someone else. To decide, all he needed was to feel his own pain.

“I had torn my hip flexors, my adductors on both sides of the groin, and my right hamstring three times,” the 2014 graduate recounted, and kept on going. “I partially tore two ligaments in my left shoulder and I broke my left arm.” A devoted lacrosse player, Miller had so many injuries several doctors told him to be happy to walk without limping.

Determined to keep playing, he found one doctor in Charlotte with a little more optimism. Dr. Nevin Markel, a chiropractor and physical therapist with expertise in nutrition, lifting and rehabilitation, studied Miller’s body mechanics and encouraged him to train with weight sleds. For Miller, 6’3” and not limping, the training worked. And the accounting/finance major found the inspiration for his thesis.

“The Diesel,” a Prowler-type weight sled Miller built with 4 x 4 railroad ties, provided some of the carpentry skills he wanted. It also gave him a mental break from academic work, something he wanted from his thesis. Most importantly, it allowed him to give Markel a thank-you gift for helping him continue being active. Named for his lacrosse nickname and painted garnet and black, The Diesel is at Markel’s gym in Charlotte, where Miller now works as an investment banker.

Miller spent four months building The Diesel, first attempting to weld a metal version. Finding that too difficult, he followed a plan using the railroad ties, making countless trips to the hardware store and having his roommate help.

“My neighbors were ready to kill me because of all the noise I made with power saws,” he said, confessing a new respect for carpenters. “It was tough but cool to do.”

After surveying more than 1,000 USC students about their use and misuse of stimulant medications, Kari Benson learned two important things: These “smart drugs” are more common on campus than people think, and there’s nothing smart about them.

“Most students claim they use them for academic reasons, but misusers have significantly lower GPAs and experience more difficulties with attention,” Benson said of her three-year research as an Honors experimental psychology major. “I also found how common misuse of stimulant medication is. Students talk about how they use it or ask other students for it casually on campus, as if it is completely normal and okay.”

While it’s okay for students diagnosed with ADHD and other attention disorders to take Adderall, Concerta, Ritalin and Vyvanse as prescribed, it’s not okay for them to misuse them or give them to their friends. Benson learned many students misuse those drugs to improve focus or stay awake to study or complete an assignment, and a smaller number take them recreationally. They’ll crush and snort them, or mix them with other drugs, including alcohol. Snorting them results in a cocaine-like high; mixing them makes the high last longer. Benson, who knew of one student who had to be helicoptered from the Carolina Cup to a hospital after mixing alcohol with Adderall, found 23 percent of USC’s student population misused the drugs last year. “Chances are everyone knows someone who has misused stimulant medication.”

Her research brought an invitation for publication as first author in Clinical Child and Family Psychology Review. It also earned her the first William A. Mould Outstanding Senior Thesis Award, which recognizes a graduating Honors senior whose work would make “a significant impact in their field of study and on their larger community.” Named for the late USC French professor and cofounding dean of the Honors College, the award, which includes a $1,000 cash prize, is given by Mould’s family.

Associate Professor Kate Flory nominated her student researcher for the award. “Kari is the most talented undergraduate researcher I have worked with in my 10 years at USC,” she wrote in her recommendation letter to the Senior Thesis Award Committee. “Her Senior Thesis and related program of research is exceptional.”

Shakespeare’s “Hamlet” has been adapted for film more than 50 times since 1900, Wikipedia reports. But it’s not likely any of them did what Alexander Jones did for his Honors senior thesis. In “Hamlet from Stage to Screen,” Jones took the famous tragedy and turned it inside out, letting its many other characters more clearly expose one of the playwright’s themes. That theme is the danger of revenge — how it backfires on those pursuing it — and harms others in its path.

“I think it’s a very important message, and I think a lot of people don’t really get it,” said Jones, ’16 English. His adaptation, 130 pages long, with production notes and a critical detailed analysis of each character, won the 2016 William A. Mould Outstanding Senior Thesis Award. Given annually by the family of the late Mould, one of the Honors College’s founding deans, the award includes $1,000, and is considered by judges to make a significant impact on the student’s field of study and larger community.

After two sports-related injuries in six months, former USC soccer captain Kevin Stam had to accept that his dream of playing five years of professional ball wasn’t coming true. But he’s lucky, he says, to have played six months on a professional team in Sweden, and to have other dreams. Two of them are becoming an international mediator and teaching people how to resolve conflict. His years as an Honors student in the College of Social Work, plus the leadership and collaborative skills honed on the field, should serve him well.

“Resolving conflict is a universal skill,” he said. “Conflicts happen all the time. They come in all shapes and sizes, all levels of intensity.”

“It’s a totally new living and learning environment. There are conflicts with roommates, professors, advisors. They’ve been at home where an adult has resolved conflicts, and sometimes students don’t have the skills. They have to learn to take matters into their own hands and stand up for themselves and resolve conflicts in a non-aggressive, non-avoidant manner.” 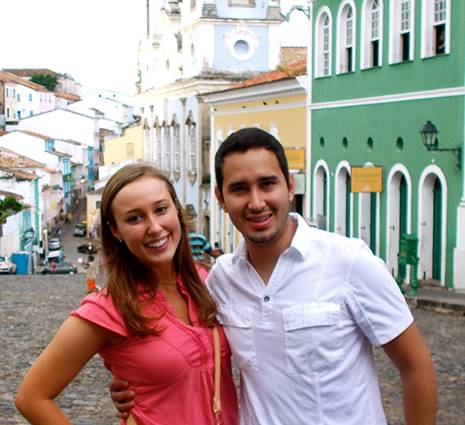 “It’s not a feasible option for many American companies to connect with Latin American ones because of the cultural and language barriers. It makes communicating an extremely arduous and time-consuming process, and success in the region difficult.” –Jacqueline Fasulo

See What It Takes

ApplyTake a look at the profile of our most recent class and learn about the application process.