A Cloud over the Sun

Harper hopped off the last step of the bus and skipped onto the familiar boardwalk. A month had passed since she started working with Ruby at the small snack shack close to the beach. Over time, it had become her escape from home, from judgmental parents and grandmas who kept asking if she had a boyfriend yet. She looked up to the sky at two seagulls chasing each other through the air. The sky was almost clear, just a few tiny clouds dotting the edges. Harper quickly walked to the shack, pulling out her key, unlocking the metal door at the back, and stepping inside.

Sitting on a stool near the counter, Ruby was early, fully immersed in a game she was playing on her phone. Harper chuckled. She was so adorable, her face burning around her sunglasses from forgetting sunscreen, leaving a strange masked, raccoon-like look.

“You’re here early,” Harper said, wondering if the other girl had even noticed that someone else came into the small building.

Ruby jerked her head up from her phone, eyes wide, before sighing with relief. “For a second I thought you were Ms. Margaret and I had forgotten to lock the door,” she laughed before looking back down to her phone. “I just woke up early and didn’t want to be around my parents. Also, I wanted to get here before it rained.”

Harper raised an eyebrow. “The sky is clear, though. Isn’t the snack bar closed if the forecast says rain?” she wondered out loud, walking over to the counter and stretching her neck to look outside. The sky was still clear.

Ruby gave her a smirk. “This is a learning moment for you, Harper. I am a weather psychic.”

Still trying to see if there were any clouds in the sky, she laughed, getting a joking glare from Ruby, who stopped looking at her when her phone went off.

Harper stopped leaning onto the marble counter after a minute and sat down on the floor. To her surprise, Ruby looked like she had seen a ghost, face pale and eyes wide open. She’d never looked that scared before.

“Are you okay?” she asked, leaning over Ruby’s shoulder. On the screen was a text from her mom. It was a photo of a notebook decorated with cutesy cat stickers, but the message underneath read, “we need to talk when you get home.” Harper almost stumbled over as Ruby quickly got up, dashing for her bag against the hot dog roller, frantically looking through it.

When she finally stopped rummaging through the bag, she dropped back on the floor and put her face in her hands. Harper went and sat next to her, unsure of what she should do, if she should wrap her arms around her or if she should just keep sitting there. The two of them stayed silent, Ruby’s happy demeanor fading away. Harper knew the book must’ve contained something bad; her parents never really texted her while she was working.

“She read my journal,” Ruby whispered, running a hand anxiously through her hair.

Harper wanted to ask her what was in there that she was so worried about, but she stayed quiet. Instead, she slowly pulled Ruby into a hug, trying to let her know she was there.

“She knows – I’m gay, Harper. She’s gonna kill me,” she put her head in her hands, looking like she realized what she said all at once. “I know you probably hate me now, too.”

It all suddenly made sense, and Harper pulled slightly away from the hug. “Ruby, I could never hate you,” she said, getting a surprised glance from her friend. “Besides, I’m a lesbian, too. We’re in the same boat. My parents don’t get it, either.”

Ruby managed to smile up at her, still shaking a bit. “Thank God. I’m glad I’m not alone.”

She pulled Harper back into a hug, no longer shaking as much as she had been before.

They sat there together for a moment, Harper hugging her as close as she could, before Ruby pulled away.

“Look,” she said, pointing towards the counter, where little drops of water were falling and dripping into the building. “I told you it would rain.”  Ruby smiled up at Harper. 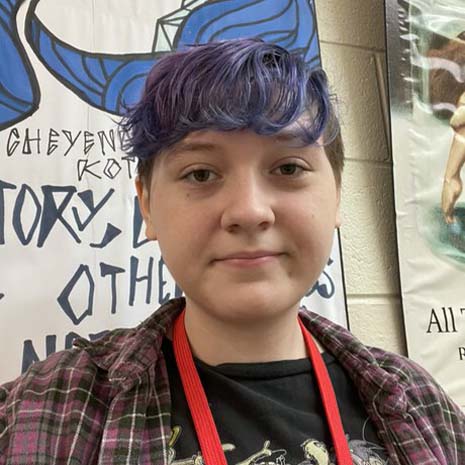 Lorelei Morgane is a junior at Charleston County School of the Arts, where her creative writing teachers are Danielle DeTiberus, Rutledge Hammes, and Elizabeth Hart. The daughter of Angela Hiott and Terry Stutts, Lorelei plans to study psychology and creative writing in college.