Who was William Short?

Born in 1759 in Surry County, Virginia, William Short enrolled in the College of William and Mary, where he studied law and was a founder and member of Phi Beta Kapa. After having passed the bar exam in 1782, the young attorney settled in Richmond and became close friends with James Monroe and John Marshall. However, Short soon abandoned active law practice and entered Virginia political life, serving in the Executive Council of State at the early age of twenty-five. Short was also related by marriage to Thomas Jefferson, who referred to him as his “adoptive son” and dutifully advised him during his formative years. In 1784 Short traveled to Paris to work as secretary for Jefferson, whom the Confederation Congress had named minister to France.

Upon Jefferson’s return to the United States in 1789, Short remained in Paris as chargé d’affaires for three years, acting as the highest-ranking U.S. diplomat in France and the sole fiscal agent the United States empowered in Europe. At the time, the Treaty of Amity and Commerce and the defensive Treaty of Alliance linked the United States and France. Short eventually negotiated more advantageous terms for the United States to refinance the repayment of these U.S. Revolutionary War debts. Despite officially reporting to President George Washington and Secretary of the Treasury Alexander Hamilton, Short was often left at his own discretion in dealing with Dutch, Belgian, and French bankers. His fiscal mission accomplished the postponement of the 1776-1789 loans to the economically sounder 1800-1812 years, hence providing Hamilton with more funds for domestic purposes. By getting Dutch bankers to purchase much of the debt, the United States freed itself diplomatically from France and Spain. Short was eventually appointed minister to The Hague and Madrid, where he initiated the talks resulting in the 1795 Pinckney Treaty, putting an end to the conflict between Spain and the United States over the navigation of the Mississippi.

Short-lived most of his European career (1785-1802), one of the longest of the early U.S. diplomatic corps, in France. He therefore witnessed first-hand the French Revolution through to Napoleon’s establishment of the Consulate, while also being associated with the Société des amis des noirs, the first French abolitionist group, members of which were the French General of the Continental Army Marquis de Lafayette and the philosopher Nicolas de Condorcet, among others. Short also became intimately involved with the Duchesse Rosalie of La Rochefoucauld, a member of one of the most prominent French noble families. Hence, his account of French politics and society and Franco-American relations is key to the comprehension of these eventful years. 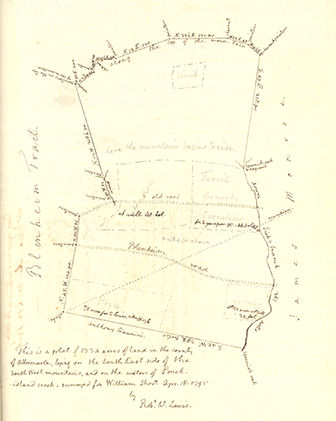 In 1795, on Short’s behalf, Thomas Jefferson bought a 1,334-acre farm in Albemarle County named Indian Camp (now called Morven), a few miles from Monticello. Both saw Indian Camp as a place to experiment with labor systems. However, while Jefferson envisioned a system of managed white tenancy with multi-year contracts to protect the land from abuse, Short advocated for an ambitious experiment to prove the feasibility and profitability of Black tenant farming as a means to their emancipation and citizenship. Today, the University of Virginia Foundation operates a historic site at Morven and interprets Short’s unique contributions to its history.

In 1810, Short returned to the United States permanently, settling in Philadelphia from where he successfully conducted his businesses. He became a member of the American Colonization Society, founded in 1816, and was its president for ten years, bequeathing $10,000 to it. In fact, while in France, he had considered leaving a part of his estate to the Commonwealth of Virginia to free enslaved women and transport them to Africa. Although he believed that colonization was the best means then available to help Black people out of bondage, Short had misgivings as to the fairness of uprooting people from family members in the United States and sending them to Africa. His proposed experiments with Black tenant farming, likely with Indian Camp in mind, indicate that he was searching for alternatives to colonization. He invested in internal improvements (bridges, turnpikes, steamboats, and railway companies), banking, and in land speculation Ohio and New York while keeping his commercial ties with Dutch and French investors in the United States. In December 1849, Short died a very wealthy man, leaving behind a fortune equivalent to $35 million today.