Through the generosity of Dr. Al and Mrs. Marcia Montgomery, along with others who wish to provide support, the Montgomery Speech-Language-Hearing Clinic offers high-quality diagnostic and treatment services while also improving its facilities and expanding its programs and services. Learn more about the Clinic and Dr. and Mrs. Montgomery below.

For nearly 50 years, the Center has provided quality diagnostic and treatment programs for individuals of all ages from the greater metropolitan area of Columbia, S.C. Because the Center is housed within the COMD department, it always benefits from being informed by the latest research in the field, with the researchers sharing office space and often seeing patients as well. Master's and doctoral students also benefit from the intersection of the Center and department faculty/research labs, which helps prepare the next generation of speech-language pathologists and communication science and disorders researchers.

The team works to give clients the highest quality and most effective evaluation and treatment in order to improve their social, educational and vocational participation. The Center serves individuals of all ages with problems such as articulation, stuttering, selective mutism, voice, language and literacy/reading, Parkinson’s, hearing, etc., logging 6,000 patient visits and approximately 225 patient outreach hours per year. The Center also houses one of only two Cochlear Implant/Auditory-Verbal Programs in the state (the only one in the Midlands), which has given the gift of sound to over 600 hearing-impaired individuals.

Through excellence in teaching, service, and research, the Center aims to meet the needs of this diverse community with regard to the nature, prevention, diagnosis and treatment of communication disorders and disabilities.

When Al Montgomery was in middle school and high school, his childhood speech disorder, stuttering, had become so severe sometimes it took him 30 seconds or more to say a word. That all changed when he attended an eight-week summer stuttering program at Miami University in Ohio after he graduated from high school. With the therapy, Al’s speech became quite fluent, and he later earned a bachelor’s degree in math with a minor in speech pathology from Miami.

Al went on to earn a master’s degree at Western Michigan University—studying with one of the profession’s “founding fathers,” Charles Van Riper, who was the mentor of Al’s undergraduate advisor and therapist. Van Riper was renowned for his methods in managing stuttering, including his own. Al then earned a Ph.D. in audiology and speech science from Purdue University, where he remained to teach classes and where he met Marcia, who was earning a master’s degree in speech pathology.

Marcia, who grew up in Chicago, gained her first introduction to the profession when she was an English major at Northern Illinois University. One of her instructors was a stutterer and taught a public speaking class in which she was enrolled. He encouraged her to pursue a career in speech-language pathology, and she subsequently changed her major.

During summer programs at Northern, Marcia found her passion working with high school students with hearing impairments. Then, for eight years, she worked with teens with speech and language disabilities outside of Chicago before returning to school to earn her master’s degree at Purdue. There, she took sign language courses and re-immersed herself in the world of high school students who were deaf.

After graduating, Marcia and Al married and took a one-year trip to Melbourne, Australia where they collaborated with the Lincoln Institute, which trained speech therapists. Then they returned to the U.S. to work in the Washington, D.C. area. Over the next decade, Al conducted research on speech-reading (i.e., lip reading) and fluency at the Walter Reed Army Medical Center, and Marcia taught students who were deaf and hard of hearing at the high school at Gallaudet University.

In 1988, they moved to South Carolina to be closer to family, and they immediately contacted USC’s Arnold School of Public Health about joining the COMD department. Until 2011, Marcia supervised graduate students, taught a popular sign language course and worked in the USC Speech and Hearing Research Center supervising students who were working with hearing-impaired clients.

Early on, Al brought in two training grants from the United States Department of Education, which started the master’s specialty track for habilitation of deaf/hearing-impaired children. He is also the coordinator for the department’s doctoral program and has served as the primary mentor for 11 doctoral students and one postdoctoral fellow. In 1989 he received the Fellowship of the Association Award from the American Speech-Language-Hearing Association, and in 2018, he is being inducted into the Outstanding Alumni Academy of Western Michigan University’s College of Health and Human Sciences. 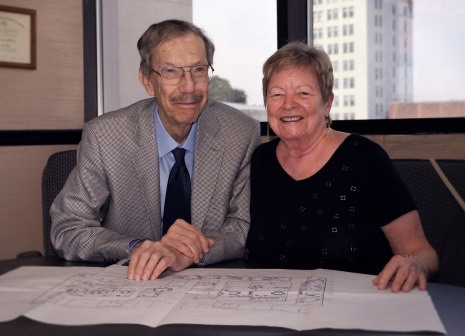 How can you help?

While the Montgomerys' lead gift covers the move and construction costs, there are still many opportunities to contribute to these improvements for COMD's  faculty, staff, students, and clients.

Learn more about how to contribute