I Am Public Health: Ronald Willis

Ronald Willis was on the cusp of retirement when he decided to launch his second career. The latter (environmental health) may seem unrelated to his first (telecommunications), but it was actually inspired by it.

“While working for the phone company in Glynn County, I saw the impact that humans had on the tidal creeks, rivers and swamps – places I had fished and hunted in as a young man,” Willis says. “I changed my mind about retiring and decided to pursue a degree in environmental health.”

Those previously untouched, but increasingly impacted, areas were in southeast Georgia where Willis grew up and lived most of his life. He spent his first career working for various technology companies, serving as a data center specialist as well as a field technician/engineer and scooping up degrees in information security and telecommunications along the way.

After making the decision to pivot to environmental health, Willis enrolled at UofSC-Aiken to complete a B.S. in Biology. He also minored in geology, earning his department’s Outstanding Student of the Year Award.

With a clearer idea of his interests than many new students, Willis made the most of his tenure as an undergraduate student. In addition to studying sediment deposits as a research assistant in biology/geology assistant professor Jessica Sullivan’s Earth Surface Processes Lab, he conducted three independent research projects. Willis also served as an undergraduate teaching assistant and a GIS Consultant for the Summer Scholars Institute. Across these experiences, he engaged in community outreach activities and presented at scientific conferences.

“Dr. Scott has been a guide and mentor since before I registered for my first class at the University of South Carolina,” he says. “He made sure to include me in many discussions, his lab and as a teaching assistant.”

Outside of his program, Willis gained experience as the GIS Manager for the South Carolina Department of Health and Environmental Control’s Apartment Address and Health Facility Update projects. He also volunteers to collect water samples to detect harmful algal blooms and completed additional training through the Center for Teaching Excellence.

Over the past several years, Willis’ research interests have evolved to focus on the effects of water temperature on pH. He’s particularly interested in how these impacts allow for the growth of cyanobacteria, which can adversely affect human and environmental health. After graduating later this year, Willis plans to continue studying water quality as a researcher with a state or federal agency. 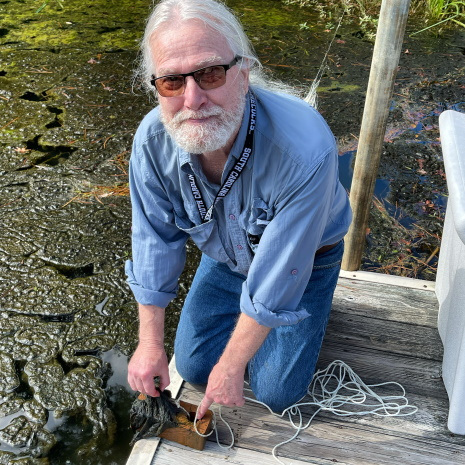 Master’s student Ronald Willis is pursuing a second career in environmental health sciences to address the impacts of human behaviors on the environment.