I Am Public Health: Blaine Lints

As an endurance and strength athlete (think: ultra-distance running, long-distance triathlons, power lifting), Blaine Lints’ life has been all about physical activity. So when the former Navy SEAL realized there was an entire field dedicated to exercise science, he knew he had found his calling.

West Coast born and raised, Lints grew up in Seattle and spent the next decade based out of California. His passion for endurance activities began during high school and gave him a head start in preparing for life as a Navy SEAL – often considered the best and most highly trained among the elite forces in the U.S. military.

During his six-year career at SEAL Team Five, Lints conducted more than 35 combat operations as part of Operation Inherent Resolve, Iraq. He also rose to the position of intelligence department head, maintaining more than a million dollars’ worth of intelligence equipment and ensuring the readiness of his platoon. His service earned him the Navy and Marine Corps Achievement Medal with Combat V.

“I experienced firsthand the relevance of exceptional physical capabilities in altering the course of an operation's success,” says Lints, who began power lifting to improve his own fitness.

He also managed to earn a bachelor’s degree in organizational leadership (University of Charleston West Virginia) during this time. After being honorably discharged, he enrolled in the M.S. in Exercise Science program at George Washington University.

“I immediately knew exercise science was an area that I wanted to understand at the highest level,” Lints says.

During his master’s program, he continued gaining practical experience as the human performance manager for Global Support and Development, a disaster response NGO. In this role, he designed and taught a course on heat stress for paramedics and physicians. He also conducted research on wearable technologies for disaster response and tactical populations, performance testing and assessment methods, and environmental stress physiology.

By the time of his graduation in May of last year, Lints already knew where he was heading next. That fall, he enrolled in the Arnold School’s Ph.D. in Exercise Science program – the number one ranked doctoral program in the field.

“I decided to attend UofSC for my doctoral program after meeting with Dr. Shawn Arent and learning more about the type of research that was being conducted in the UofSC Sport Science Lab,” says Lints. “Some of the lab's research, funded by the Department of Defense, was in line with my goals of improving human performance in tactical populations, and I felt like it was a setting where my past experiences would be most valued. Additionally, Dr. Arent’s depth of experience in the field and as a mentor made the decision an easy one.”

Now in the second semester of his studies, Lints is an Exercise Science Departmental Fellow and recently won the National Strength and Conditioning Foundation Minority Scholarship. He conducts health and performance research alongside Arent in the Sport Science Lab as a graduate assistant. In addition to helping tactical populations optimize their performance, Lints’ long-term goal is to become an independent researcher in this rapidly evolving field and to work with and mentor students. 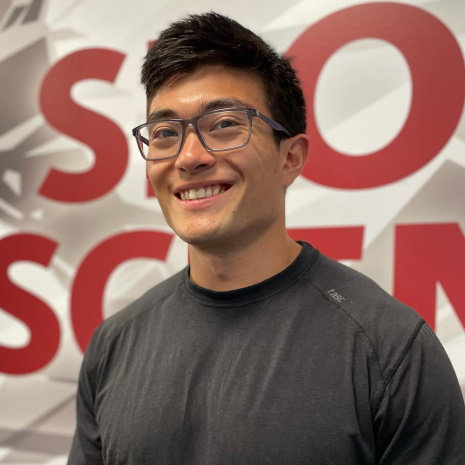 Endurance/strength athlete and former Navy SEAL Blaine Lints is pursuing a Ph.D. from No. 1 program in the nation to improve human performance for tactical populations.