Fanghui Shi, a student in the Ph.D. in Health Promotion, Education, and Behavior (HPEB) program, is one of the six recipients of the IAS/ANRS Lange/van Tongeren Prize for Young Investigator from the International AIDS Society. Shi was recognized at the Society’s recent annual meeting with the award for her abstract, Racial residential segregation as a structural barrier to viral suppression among people living with HIV in Southern United States.

As a graduate research assistant with the South Carolina SmartState Center for Healthcare Quality (CHQ), Shi conducted this study in partnership with other CHQ researchers and with the support of a SPARC research grant from the Office of the Vice President for Research. Her longitudinal study examined the relationship between county-level racial segregation and rates of people living with HIV in 46 counties across South Carolina from 2013 to 2018.

“Achieving viral suppression is one of the crucial goals of the HIV treatment cascade,” Shi says. “Residential segregation by race has long been framed as a potential structural barrier to successful viral suppression at the individual level, but the evidence is scarce at the population level, which is important to inform healthcare policymaking and resources allocation.”

“Our research showed a structural influence of residential segregation on viral suppression and also suggested that more social cohesion at the county level was a protective factor of viral suppression,” Shi says. “These findings emphasize the need to address racial disparities in social capital based on racial residential segregation as part of a comprehensive strategy to curb the HIV epidemic.”

Currently entering her third year of the doctoral program, Shi studied preventive medicine at Shanghai JiaoTong University before enrolling at the Arnold School. With interests in the health behaviors and mental health of people living with HIV, she works closely with HPEB professor Xiaoming Li, who directs CHQ and the UofSC Big Data Health Science Center.

“Dr. Li has given me the opportunity to join multiple projects I am interested in,” says Shi. “I am grateful for the support I have received from CHQ and the Big Data Health Science Center as well as Dr. Li, Dr. Jiajia Zhang, and Dr. Xueying Yang for providing me with valuable and necessary guidance on developing the abstract for the AIDS 2022 conference.” 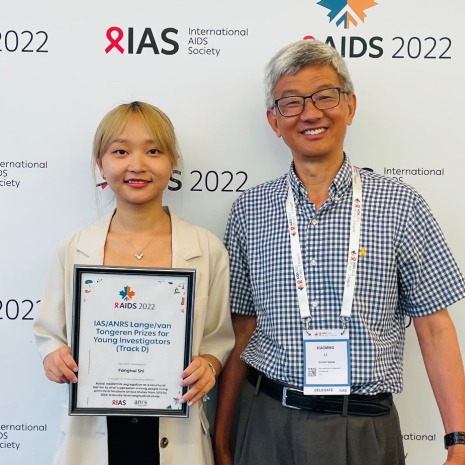 Fanghui Shi (left, pictured with Xiaoming Li) is a student in the Ph.D. in Health Promotion, Education, and Behavior program and a graduate assistant with the SmartState Center for Healthcare Quality.