Jennifer Mandelbaum, a doctoral candidate in the Ph.D. in Health Promotion, Education, and Behavior program, has received the Dean’s Award for Excellence in Leadership from the Graduate School. Based on nominations from graduate directors across the university, this award honors graduate students who have demonstrated excellence in leadership on campus, in their academic disciplines, or in the community. Mandelbaum has made an impact in all three of these areas during her tenure at UofSC.

Within the public health field, Mandelbaum has helped advance research in the areas of health disparities, the social determinants of health and chronic disease prevention. Using a variety of methods to examine the core social factors driving population health inequality, her work focuses on helping communities comprised of low-resource populations.

The USC Presidential Fellow is a Junior Scholar with the South Carolina SmartState Center for Healthcare Quality and served as a  graduate research assistant on two different Arnold School-based studies. She is currently a graduate assistant in the Division of Diabetes and Heart Disease Management at the South Carolina Department of Health and Environmental Control where she supports evaluation activities for two Centers for Disease Control and Prevention-funded projects.

Mandelbaum has won multiple poster and abstract awards for research and teaching and several travel grants. In addition to developing manuscripts and engaging in frequent professional presentations, she has mentored several undergraduate students. In 2018, she was the recipient of the Outstanding Student Abstract Award from the South Carolina Institute of Medicine and Public Health.

As co-president of UofSC’s chapter of the Institute for Healthcare Improvement (i.e., an interprofessional group promoting population health education), Mandelbaum led the chapter on three local and national conference presentations – winning poster awards at two of these events. She also facilitated a session on skills for leading interdisciplinary teams at South Carolina’s 2018 Student Leadership and Diversity Conference.

In her three years with UofSC’s Graduate Student Association, Mandelbaum has leveraged her roles as vice president and president to help the organization grow from a fringe group to one that uses its considerable voice to advocate on behalf of graduate students on campus and across the nation. For example, she helped increase the health insurance subsidy for graduate students from 19 to 50 percent of the premium. Mandelbaum also spearheaded a survey on graduate stipends, instituted biannual town halls and worked toward greater collaboration among graduate student organizations university-wide.

In addition to serving in the highest ranks of the Institute for Healthcare Improvement and the Graduate Student Association, Mandelbaum is involved with several other university committees, such as the Advisory Committee on Professional Development for Graduate Students (where she previously served as co-chair), the Committee on Curricula and Courses and the Provost’s Advisory Committee on Women’s Issues. As the sole graduate student representative on the 10-member Excellence Committee, Mandelbaum contributed to a $17 million strategic initiative to raise the university’s profile.

Off campus, she plans Table for Six events for the Columbia Opportunity Resources and serves in various leadership roles in professional societies (e.g., Mentorship and Training Coordinator for the Student Special Interest Group of the Society of Behavioral Medicine). “In each of these roles, I seek to not only understand students’ needs and advocate on their behalf, but to also give them a greater voice,” Mandelbaum says. “I work to develop those around me as well, as I strongly believe leadership is more of a practice than a position.”

In addition to the Dean’s Award for Excellence in Leadership, Mandelbaum has been recognized with UofSC’s Emily Thompson Award in Women’s and Gender Studies and was selected to join the Graduate Civic Scholars Program. She also won a student presentation award and received a poster session award at the American Public Health Association’s 2018 annual meeting.

Mandelbaum is currently working on her dissertation project, which focuses on early life socioeconomic disadvantage and comorbid obesity and asthma among adolescents, with funding from a SPARC award from the Office of the Vice President for Research. After her 2020 graduation, her future plans include conducting population health research for a nonprofit research institute or nonpartisan think tank.

The Graduate School announces 2017-2018 Presidential Fellows, including 13 from the Arnold School 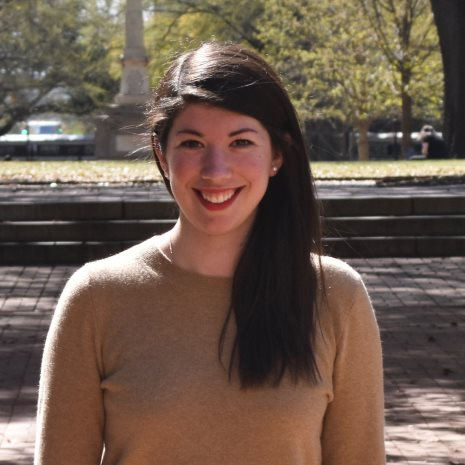 Jennifer Mandelbaum is a doctoral candidate in the Department of Health Promotion, Education, and Behavior.