A team of researchers led by epidemiology and biostatistics associate professor Jan Eberth has completed a study, published in Preventing Chronic Diseases, that assessed the availability of low-dose computed tomography (LDCT) for lung cancer screenings in the United States. In conjunction, they examined lung cancer mortality rates across geographic regions as well as the spatial proximity of high-risk populations to screening centers.

Although cancer death rates have decreased for lung, breast, prostate and colorectal cancers, lung cancer remains the leading cause of cancer-related death among U.S. men and women. Close to a quarter million people are diagnosed annually in the United States, with most diagnoses made at a late stage when the cancer is more difficult to treat.

Efforts to combat lung cancer have included the federally-sponsored National Lung Screening Trial, which demonstrated that screening high-risk populations (i.e., older adults with a smoking history) with LDCT each year can reduce lung cancer deaths by up to 20 percent. In 2013, the U.S. Preventive Services Task Force endorsed LDCT lung cancer screening for high-risk persons, which led to changes in reimbursement policies among insurers. The following year, amendments to coverage and billing codes were enacted by the Centers for Medicare & Medicaid Services.

Since these new recommendations were announced, researchers like Eberth have been working to determine whether and how much these changes have impacted patient and provider screening behaviors. For example, data from the 2015 National Health Interview Survey showed that just 4 percent of persons at high-risk for lung cancer had been screened in the last year. 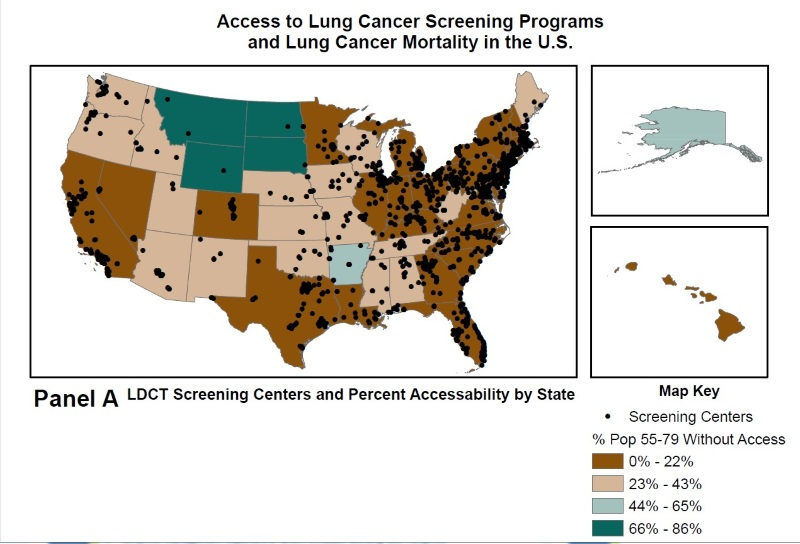 In another 2015 study, Eberth and collaborators assessed family physicians’ knowledge of and attitudes toward LDCT lung cancer screening, concluding that these clinicians may have inaccurate knowledge about the new lung cancer screening recommendations. Eberth’s research on perceptions and practices of LDCT screening among physicians revealed that physicians identify LDCT as an appropriate tool for screening high-risk patients yet perceive a variety of barriers (e.g., prior authorization requirements, lack of insurance coverage, insurance denials) to engage in LDCT screening discussions with patients and making subsequent referrals.

“Our goal with this most recent study was to assess the landscape of LDCT screening in the United States,” says Eberth, who is also the director of the Rural and Minority Health Research Center. “We need to determine the availability of screening to identify regions for possible program expansion.” 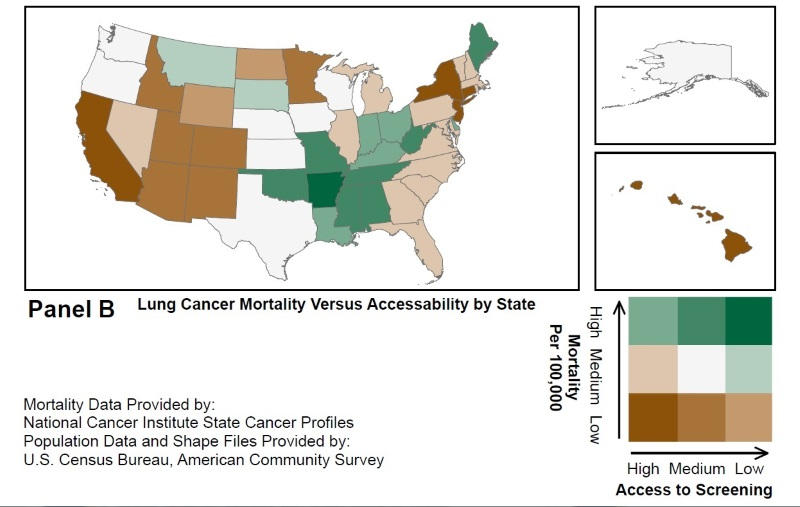 According to the research team, the number of LDCT screening centers increased from an estimated 203 to 1,748 between 2014 and 2017. Nearly 15 percent of older adults across all states did not have access to a designated screening center within 30 miles. Slightly more than 28 percent did not have access within a 30-minute drive. The authors also found that rural residents were less likely than urban residents to have access to LDCT screenings centers within 30 miles (47.5 percent rural vs 93.7 percent urban) or a 30-minute drive (22.2 percent rural vs 83.2 percent urban).

“Our findings indicate that despite a dramatic increase in the number of LDCT screening centers available since 2014, there are significant disparities in the distribution of these centers, most notably between rural and urban areas, which is particularly concerning given the large proportion of high-risk person in rural areas,” says Eberth. “We hope that the geographic patterns illustrated in this study stimulate further research into ways to create more equitable access to lung cancer screening services in high-need regions.”