The University of South Carolina’s most prestigious annual awards for research and scholarship are administered by the Office of the Provost. James Carson, professor of exercise science and chair of the department, has received the 2017 Educational Foundation Award for Research in Health Sciences. Established more than three decades ago in 1984, this award recognizes faculty for outstanding research and scholarship. Carson was honored at an award ceremony held by the Provost on April 26 and will be recognized during spring commencement.

Carson joined the Department of Exercise Science at the Arnold School of Public Health for his first academic appointment in 1999. He had just completed postdoctoral research fellowships in physiology and cell biology (for a combined total of six years) immediately following his graduation from The Ohio State University where he earned a Ph.D. in Exercise Science.

During his 18 years at the Arnold School, Carson became a full professor and held roles such as Division Head of Applied Physiology and Director for Graduate Studies in Exercise Science. He is currently the chair of the exercise science department and the associate director for UofSC’s Center for Colon Cancer Research.

In his Integrative Muscle Biology Laboratory, Carson investigates the muscle wasting that is caused by cancer, called cancer cachexia, at the cellular and molecular level. This debilitating condition is involved in 20 percent of all cancer deaths and is more prevalent in colon, lung, and pancreatic cancers. Using preclinical mouse models of disease, his laboratory examines the regulation of skeletal muscle metabolism caused by the cancer environment that serve to diminish overall health status.

Currently, his laboratory is investigating the role of exercise and muscle contraction for attenuating or blocking cancer-induced muscle wasting. He is the primary investigator of his second National Institute of Health R01 grant and serves as a co-investigator on several other grants with his total extramural funding exceeding more than $6 million at present.

Carson’s work has resulted in more than 85 peer-reviewed publications. During the past three years, while serving as chair of the exercise science department, he has published 25 refereed publication and had over 30 abstracts presented by students at national and international conferences. Since 2012 his published research has been cited over 2,300 times.

Due to his national and international reputation for his expertise in cancer cachexia, he has given five invited lectures at national or international conferences over the past two years. As he has built his research program, Carson’s dedication to mentorship has led him to invite interested students, ranging from high school to postdoctoral level, to gain experience in a nationally recognized scientific research laboratory.

At the graduate level, Carson has served on 18 master’s thesis committees or student projects. He has served on more than 20 doctoral committees for Ph.D. graduates, leading 12 of them as chair. Carson currently serves as chair on five doctoral committees that are in progress, and mentors one post-doctoral research fellow through a diversity supplement to his NIH grant. His 2009 Arnold School of Public Health faculty Research Award and 2016 Distinguished Research Leadership Award from the South Carolina Governor’s School for Science and Mathematics are just two indicators of the impact he has made both on the scientific field and in the lives of aspiring scientists.

“Dr. Carson is an outstanding scientist, but he is more than a scientist–he is recognized as a model university professor,” says Larry Durstine, Distinguished Professor of Exercise Science. “He has actively sought help from various sources to succeed as a scientist and administrator while developing his skills as a mentor and teacher.” 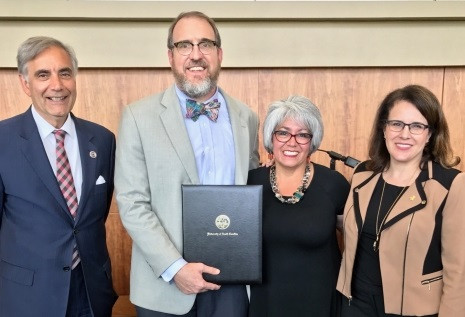 James Carson was recognized with the USC Educational Foundation Award for Research in Health Sciences at a ceremony on April 26.