Currently sponsored by the Office of the Provost at the University of South Carolina, the Carolina Diversity Professors Program was established by the South Carolina General Assembly, USC, and the W.K. Kellogg Foundation in 1997 to recruit and prepare minority students for careers as college and university professors. The initiative aims to address underrepresentation of minorities and to promote and increase diversity in the professoriate.

Participants receive financial support ($6,000 stipend/year) in addition to graduate assistantships, a faculty mentor, and an array of professional development opportunities. This elite program has been recognized by Insight into Diversity Magazine for its “impressive results” and “vital impact.”

Samantha McNeal, an Environmental Health Sciences (ENHS) doctoral student who has just completed the first year of her program, has been selected to join the Carolina Diversity Professors Program this fall. Originally from Denver, McNeal came to the Arnold School for the interdisciplinary approach of the ENHS department. She’s looking forward to a career in researching and teaching environmental health issues, particularly in the areas of risk assessment and risk management. McNeal has found mentors to help guide her in her advisors, SmartState Endowed Chair Jamie Lead and ENHS Chair Geoff Scott.

The first year at Carolina has already been a great one for this up-and-coming scientist. McNeal took on a leadership role with the Society of Toxicology’s Toxicologists of African Origin Special Interest Group. She’s also immersed herself in the cutting-edge research and educational efforts (e.g., see McNeal’s role in the K12 educational program on nanomaterials at EdVenture) of the SmartState Center for Environmental Nanoscience and Risk (CENR) where she holds an assistantship.

To cap the year off, McNeal just received notification that a paper (Outdoor urban nanomaterials: The emergence of a new, integrated, and critical field of study) accepted for publication. She developed the manuscript, along with Assistant Professor Mohammed Baalousha and several other CENR researchers, based on the research she conducts at CENR.

And now she’s looking forward to a new adventure with the Carolina Diversity Professors Program. “I am glad to be a part of this program because of the mentorship it provides as well as opportunities for service and professional development,” says McNeal. “Being surrounded by a group of individuals who have the desire to better themselves and who are determined to succeed is both motivating and encouraging.” 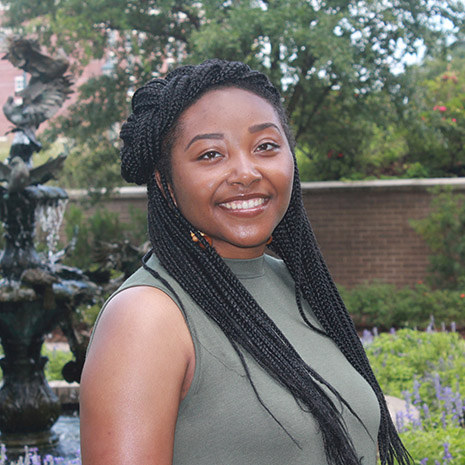