“Maps help us to understand the spaces in literature. In one course I’m teaching, ‘Reorienting Plot: Maps and Fiction,’ I use rare maps to get students to think about perspective and plot and how they relate to space,” said Britton, Curator of Rare Books and Special Collections. “When we read fiction, it is good to think about narrative perspective. Taking Frankenstein and combining it with study of original maps of the Alps, the Arctic and Great Britain, a few of the locations in the novel, is one effective way to do this.

“And when we study Joseph Conrad’s Heart of Darkness, we look at maps with ‘blank spaces’ and ‘white patches’ like those that inspired the novel’s main character,” said Britton, a USC graduate who has a background in comparative literature. “When I saw all those 19th-century travel narratives from the Irvin Department of Rare Books and Special Collections, and especially the elaborate fold-out maps they include, I thought, ‘We have to read Heart of Darkness and use these.’ I’m using a lot of Arader items, including heavy use of the natural history engravings in an English 288 Romanticism course.”

The W. Graham Arader III Collection is a teaching collection of approximately 15,000 natural history watercolors, woodcuts, engravings, lithographs, chromolithographs and maps from the 16th to 20th centuries. A world-renowned dealer in maps and engravings, Arader has made it clear the items should be used to educate. Libraries Dean Tom McNally and College of Arts and Sciences Dean Mary Anne Fitzpatrick worked together to plan how the Arader items would be integrated into the curriculum and to create the dual faculty position that Britton now holds. There are only a handful of such posts in the nation, and it is a first for USC.

And while she frequently borrows from the Arader Collection, Britton has all of the University Libraries’ collections at her fingertips.

“I’m assisting a Latin professor whose class is reading an epic poem by Virgil," she said. "The Aeneid is about the founding of Rome, and the Libraries have hand-colored Renaissance maps in the John and Mary Osman Braun and Hogenberg Collection that we’re using to show how narratives rely on movement."

Britton’s classes meet in the Hollings Library, where the items are housed.

“This allows us to have something from the collections for every class meeting, which greatly amplifies what students learn in the classroom,” she said.

This article originally appeared in the Spring 2015 issue of University Libraries. 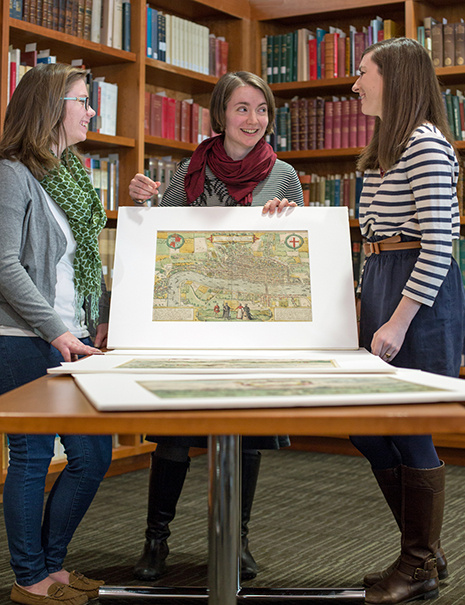 Collections in the Classroom

Dr. Jeanne Britton, at center in the photo, shows students maps from the John and Mary Osman Braun and Hogenberg Collection.