Heather Brandt wears many hats. She was recently named the first Associate Dean for Professional Development by The Graduate School. Her research expertise is in working with stakeholders to address cancer health disparities. And the James A. Keith Excellence in Teaching Award (2015) winner is passionate about educating future public health professionals and scholars.

But the hat she likes best is the one that combines all of these areas. It’s the one she wears to fight cancer through human papillomavirus (HPV) vaccination research and advocacy. “HPV vaccination is cancer prevention,” Brandt states simply. But the history behind proving this fact has been anything but simple.

Brandt’s interest in HPV infection as a main cause of cervical cancer began in the 1990s when she first learned of the connection—a link that was discovered by Harald zur Hausen in 1984, who later received a Nobel Prize for his work. “This was a major discovery that was hundreds of years in the making, beginning when a physician observed that women in the nunnery did not develop cervical cancer whereas women in the brothels did,” says Brandt. “Many scientists devoted their careers to determining the cause of cervical cancer, and Dr. Zur Hausen was once dismissed at a professional conference for his initial thoughts about HPV as the cause.” Since 2001, the associate professor of health promotion, education, and behavior (HPEB) has researched and advocated her way to emerge as a pioneer in HPV education and legislation to increase vaccination rates in S.C. and reduce the incidence of the various cancers and diseases related to HPV.

After the connection between HPV and cervical cancer was established, the research continued to determine whether preventing HPV infection could prevent cancer. “Pap tests had been the greatest cancer prevention discovery to date, and were noted as one of the ten greatest public health achievements in the 20th century by the CDC, and they resulted in a dramatic reduction of deaths,” she says. “But those tests can only do so much when HPV is already present.”

Zur Hausen’s work, along with the work of many others, resulted in the development of the HPV vaccine for the types of HPV most often associated with cervical and other cancers that affect both men and women. Yet, without widespread education and adoption, the vaccine’s effectiveness is limited. “Cervical cancer still takes the lives of far too many women who are in the prime of their lives as daughters, sisters, mothers, wives, and friends,” says Brandt. “This is unacceptable.”

After seeing a leader in HPV vaccination, Laura Koutsky, speak at international conference on HPV in Paris back in 2002, Brandt was inspired to see what she could do to translate the scientific discoveries related to the vaccination into saving lives through public health intervention. Over the past 15 years, she has conducted research on HPV and cervical cancer, HPV vaccination, and HPV-associated diseases. On her own, and as a member of various networks and other partnerships (e.g., National HPV Vaccination Roundtable), Brandt has funded several grants and published numerous papers on HPV vaccination.

Cervical cancer still takes the lives of far too many women who are in the prime of their lives as daughters, sisters, mothers, wives, and friends. This is unacceptable.

On the education side, Brandt has ignited a passion for this topic within her students and provided countless presentations to public health professionals and the general public on HPV (see a recent invited blog post). The current recommendations are for women to obtain Pap tests with HPV testing and for children to be vaccinated at ages 11-12, as early as age 9 and as late as age 26, to prevent cancer. “I’ve shared information about HPV vaccination with anyone who will listen, really,” she says. “Knowledge is powerful but only as powerful as how we act on the knowledge gained.”

Behind the scenes, the Arnold School of Public Health Faculty Service Award (2009) winner’s service and advocacy work is extensive (see I Am Advocacy article on Brandt by Tell Them; she is also pictured above (with Choose Well Director and HPEB Adjunct Faculty Member Deborah Billings at left) at a Tell Them Bee Day event earlier this year, advocating for the Cervical Cancer Prevention Act). She is a member of the American Cancer Society and CDC’s joint National HPV Vaccination Roundtable, a national coalition of public, private, and volunteer organizations along with invited individuals who are dedicated to reducing the incidence of and mortality from HPV-associated cancer in the U.S. Brandt has also served on a S.C. committee convened by then-Governor Jim Hodges to explore the burden of cervical cancer in our state. She is the immediate past chair of the South Carolina Cancer Alliance, the co-founder and co-chair of Cervical Cancer-Free South Carolina, co-leader of a work group on HPV vaccination as part of the Cancer Prevention and Control Research Network (funded by CDC and the National Cancer Institute), and a board member of the South Carolina Cervical Cancer Awareness Initiative.

One of the most recent milestones in Brandt’s efforts, in partnership with the South Carolina Coalition for Healthy Families, was getting the Cervical Cancer Prevention Act of 2016 passed to increase educational efforts about HPV vaccination and increase access to HPV vaccination for adolescents who are medically underserved. To secure their support, Brandt provided testimony to state legislators on the benefits of the HPV vaccination in protecting children from the various cancers and other diseases that are caused by HPV. Another major achievement this year for Brandt with many partners* were the first-ever public statements on HPV vaccination that were made by the National Cancer Institute and the Hollings Cancer Center.

Knowledge is powerful but only as powerful as how we act on the knowledge gained.

For her efforts, Brandt has become a recognized leader in the arena of HPV vaccination and cancer prevention. A few of her numerous honors include the Award for Excellence in Cancer Prevention from the South Carolina Alliance, the Distinguished Faith-Based Community Health Award for Efforts to Increase Awareness and Promote Action to Prevent Cervical Cancer from the State Baptist Young Woman’s Auxiliary of the Woman’s Baptist Education and Missionary Convention of South Carolina, and the James E. Clyburn Emerging Leader in Public Health and Health Disparities Research Award. Most recently, she received this year’s Norman J. Arnold Alumni Medal for her initiative and dedication.

In a truly collaborative and comprehensive approach, Brandt tirelessly tackles HPV-related cancers by pushing HPV vaccination forward from all angles: research, education, service and advocacy. Then she shifts, so that she’s researching the advocacy and advocating the research and so on, to fully leverage the impact of each of these angles. It’s hard work, but it’s successful and it’s rewarding. No wonder it’s her favorite hat. 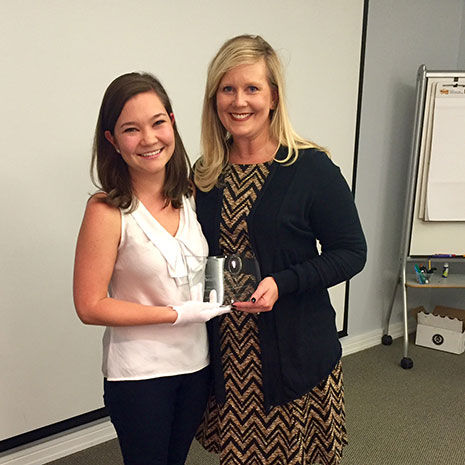 Associate Professor Heather Brandt (at right with Arnold School alumnus and WREN Associate Director of Policy and Government Relations Ashley Crary, who was the recipient of the 2014 Outstanding Master's Student in HPEB Award) accepts an advocacy award on behalf of Cervical Cancer-Free South Carolina last year for the organization’s work advocating for the Cervical Cancer Prevention Act.