Dr. Catalana is a graduate of Bates College, earning his bachelor's degree in Biology, and the State University of New York at Stony Brook, where he earned his medical degree. After finishing a pediatric residency at Prisma Health–Upstate, formerly Greenville Health System, Dr. Catalana served in the National Health Service Corps as medical director of a community health center in Louisville, Ky., receiving a Regional Health Administrator's Award for achievement above and beyond normal duty.

After two years of service in the Corps, he completed a general academic pediatric fellowship at the Children's Hospital of Pittsburgh and earned his M.P.H. in health services administration from the University of Pittsburgh. Dr. Catalana returned to Prisma Health–Upstate, joining the pediatric residency program as director of the newborn nursery. He later served as the director of pediatric ambulatory care and associate director of the Pediatric Residency program before being named program director in 2001.

In addition to his responsibilities in graduate medical education, Dr. Catalana has, since its establishment in 1991, supervised third- and fourth-year medical student education for the Greenville campus of the University of South Carolina School of Medicine. He served as director of student services from 1991 to 2006 when he stepped down as the Pediatric Residency program director and was named assistant dean of medical education, UofSC School of Medicine.

Dr. Catalana is currently a clinical professor of pediatrics and board certified in both pediatrics and adolescent medicine. He is a member of the American Academy of Pediatrics and the South Carolina chapter of the academy. He was a member of the Institutional Self Study Task Force for the developing medical school in Greenville, chaired the medical student subcommittee and served on several other subcommittees. He has delivered multiple invited lectureships and serves as a contributor to pediatric board review publications and courses. An honorary member of the Alpha Omega Alpha Honor Medical Society, Dr. Catalana has been the recipient of the O'Neill Barrett Excellence in Teaching Award from the UofSC School of Medicine on six occasions. He has also received the Faculty Member of the Year Award six times and, in 2008, was the recipient of the Leonard Tow Humanism in Medicine Award. 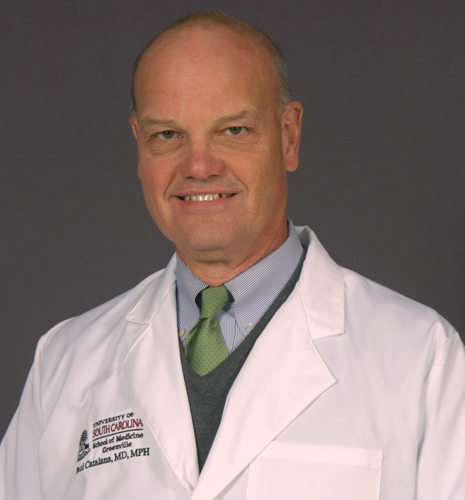