Shelley Welton wanted no part of the law after watching her mother work tirelessly in children’s law and come up against structural issues that day-to-day lawyering couldn’t fix.

But after getting a master’s degree in environmental policy work, she realized that she needed a better understanding of the law to make progress.

“I realized that I was lacking analytical tools and rigor, so I finally relented and agreed to go to law school,” she says.

Now as a law professor and researcher at the University of South Carolina, she combines her legal acumen and her love for nature to advocate for energy policies that protect the environment.

Welton credits her time at “hippie-dippy” mountain summer camps as a kid growing up in Charlotte, N.C., with helping her form her love of the outdoors.

“I came to environmental law from a place of caring about threatened people and places and now the pressing problem is climate change,” she says. “If what you want to do is make change in the field, a law degree is a good way to go about it.”

Her most recent research project is a collaboration with UofSC geography professor Conor Harrison called “The States that Opted Out.” The project won an ASPIRE grant in fall 2018 that allowed the researchers to interview energy experts across the Southeast to learn why states in the region have opted out of the dominant national model of forming regional electricity markets and have chosen instead to pursue a path of traditional, regulated utilities.

If what you want to do is make change in the field, a law degree is a good way to go about it.

“We anticipate that this research will lead to innovative publications linking Southern exceptionalism on energy policy to the climate change challenge in both law and social science journals,” Welton says, adding that the work has boosted her reputation as an expert on Southern electricity policy.

“Her work grapples with difficult statutory frameworks in light of policy goals that both private and public constituencies must contend,” says fellow law professor Thomas P. Crocker. “The sheer difficulty in mastering the technical legal background is impressive. But doing so in a way that connects how we regulate energy production to how we might rethink our approaches to energy governance in a way that facilitates legal adaptation to the problems climate change presents, places her among the leading scholars of energy law in the country.”

Welton says the discussions around climate change and energy production often morph into discussions about the future shape of American society. It’s a question very much in the news as Texas grappled this winter with the failure of its power system during one of the state’s worst winter storms on record.

“It’s a pivotal moment for how we run our economy going forward,” she says. “And as storms increase in intensity, people are coming to understand climate change viscerally.”

While her work can sometimes feel as Sisyphean as her mother’s work to protect children, she says it is also what motivates her.

“Climate change creates political, economic, social problems that need to be solved and the fate of the planet hangs in the balance,” she says. “That makes the job depressing sometimes.

“I am not under the impression that the work that I do is going to transform the planet, but what gets me up in the morning is the thought that there is something worthwhile to do and every little bit helps.” 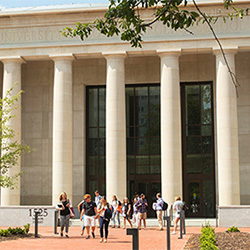