Opening a wide window on the nano-world of surface catalysis 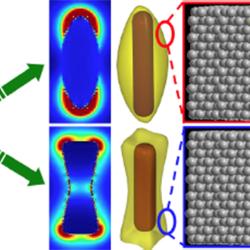 A surface catalyst with a built-in sensor: that's what chemist Hui Wang and co-workers built by bridging a size gap on the nano-scale. Their silver nanoparticles combine plasmon resonance with catalytic activity, making SERS and other analytical data available in real time on a surface catalyst.

Surface catalysts are notoriously difficult to study mechanistically, but scientists at the University of South Carolina and Rice University have shown how to get real-time reaction information from Ag nanocatalysts that have long frustrated attempts to describe their kinetic behavior in detail.

The key to the team's success was bridging a size gap that had represented a wide chasm to researchers in the past. To be effective as nanocatalysts, noble metals such as Au, Pt, Pd and Ag typically must be nanoparticles smaller than 5 nm, says Hui Wang, an assistant professor of chemistry and biochemistry at South Carolina who led the team in collaboration with Peter Nordlander of Rice University.

Unfortunately, 5 nm is below the size threshold at which plasmon resonance can be effectively harnessed. Plasmon resonance is a phenomenon giving rise to a dramatic enhancement of impinging electromagnetic signals, which is the basis of analytical techniques such as surface enhanced Raman spectroscopy (SERS).

The ability to utilize the analytical power of plasmon resonance in a nanomaterial requires larger nanoparticles, "at least tens of nanometers in diameter," says Wang. The incompatibility of the two size regimes had long precluded the use of a range of spectral techniques based on plasmon resonance—SERS is just one—on noble metal nanocatalysts under 5 nm.

But as they just reported in Nano Letters, Wang and his team managed to combine the best of both size worlds.

Starting with cuboidal nanoparticles about 50 nm wide and 120 nm long, they chemically etched flat surfaces in a way that generated curved surfaces, creating nanoparticles that successfully catalyzed a model surface hydrogenation reaction. According to the team, the catalysis is the result of replacing low-energy atoms on the flat surface with exposed atoms after etching.

The stepped surface of the etched nanomaterial thus mimics the environment of a sub-5-nm nanoparticle: more exposed, active surface atoms can participate in catalysis.

And the catalysis is on a nanoparticle with plasmonic activity, which the researchers showed can be "tuned" by varying the shape and size of the nanoparticles. The team demonstrated the ability to convert cuboids (something like a short rod but with square rather than round sides) into what they termed "nanorice" and "nanodumbbells" through two different kinds of chemical etching. The two shapes had distinct plasmonic properties that could be varied by stopping the etching at different stages to create different sizes and shapes of nanoscale rice and dumbbells.

That plasmonic activity can be harnessed for SERS and other analytical techniques to study catalytic reactions in great detail as they occur.

"Raman spectroscopy is extremely powerful, with information about molecular fingerprints—you can see the structures, you can tell how the molecules are oriented on the surface," Wang says. "If you want to use GC, HPLC, or mass spec, you have to damage a sample, but here you can actually monitor the reaction in real time.

"And there is much more information with this approach. For example, we identified the intermediate along the reaction pathway. With those other approaches, it's really hard to do that."