Cancer cells: Finding the few foes among billions of friends 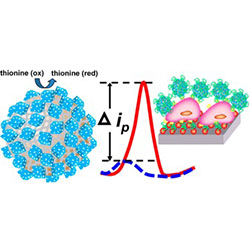 A cell at a time

An enzyme-free detection system was used to quantify just a few circulating tumor cells. Comprising Fe3O4 beads decorated with bimetallic nanocages, the hybrid electrocatalyst is a hardy alternative to the natural enzyme horseradish peroxidase for cytosensing.

Beating cancer is all about early detection, and new research from the University of South Carolina is another step forward in catching the disease early. A team of chemists is reporting a new way to detect just a few lurking tumor cells, which can be outnumbered a billion to one in the bloodstream by healthy cells.

The researchers have constructed an ultrasensitive nanoprobe that can electrochemically sense as few as four circulating tumor cells, and it doesn’t require any enzymes to produce a detectable signal.

“That makes it a very robust system,” says Hui Wang, a chemist in the university’s College of Arts and Sciences who led the research team with South Carolina colleague Qian Wang and Jun-Jie Zhu of Nanjing University. “We show that it’s much less sensitive to pH and temperature than the natural enzyme horseradish peroxidase, a traditional means of enhancing sensitivity.”

Cancer can metastasize by releasing tumor cells that are capable of spreading the disease to new parts of the body. But the circulating cells also represent a golden opportunity for modern medicine: detecting them in a patient is a telltale sign of a tumor.

They’re tough to find, though. In a billion blood cells, there might be just one circulating tumor cell that could trip an alarm.

The enzyme-free detection system is based on the electrochemical properties of Fe3O4 nanoparticles, which since 2007 have been known to mimic the peroxide-reducing capacity of horseradish peroxidase. Wang’s team was surprised to find that the nanoparticles could also catalyze the electrochemical reduction of small dye molecules, such as thionine, even in the absence of peroxide.

Wang and his team recently reported in the Journal of the American Chemical Society how they decorated Fe3O4 beads with bimetallic nanocages to create a hybrid electrocatalyst. Circulating tumor cells that were trapped onto an electrode surface with cell-targeting aptamers were detected by cyclic voltammetry of thionine. The system had a wide linear response range and a detection limit down to just a few cells.

There’s still a long way to go to get a device into the clinic, but Wang can see the potential of the sturdy inorganic nanoprobes.