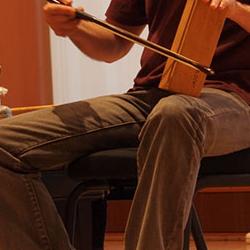 In recognition of their innovative approaches to music and photography, two University of South Carolina professors have been awarded 2014 Jasper Awards.

Percussionist and music professor Greg Stuart is widely acclaimed for alternative percussion techniques like sustained friction, gravity-based sounds produced by small grains, sympathetic vibration and electronic instruments, and his recordings have received accolades by music critics nationally and locally. For his latest project Stuart has put together an unconventional collection of sounds, including the evening chirps of songbirds and the ticking tightrope scamper of a grey squirrel as it leaps from a branch.

Likewise the outside environment serves as the muse for photography professor Kathleen Robbins. Her projects, “In Cotton” and “Into the Flatland,” document contemporary life in the Mississippi Delta. Using large-format images she reveals the contrasts of the place: soil more fertile than most in the world, alongside uninhabitable swamplands; communities holding some of the richest while also the poorest inhabitants; over-soaked wet and drought-ridden land; and a landscape defined by shapely hardwood breaks and infinite horizons.

Robbins coordinates the photography program in the School of Visual Art and Design and is an affiliate faculty member of Southern Studies, where she teaches Photography of the Rural South. Robbins’ photographs have been exhibited in numerous galleries and museums across the country and have been featured on CNN and NPR as well as in Oxford American and Garden and Gun magazines.

“Continuum Unbound” was listed among the top 50 recordings by Wire magazine, an international journal covering alternative, underground and non-mainstream music.

In addition to teaching experimental music courses in the School of Music and the South Carolina Honors College, Stuart has organized the premieres of works by Pisaro and has restaged John Cage’s final piece “Four6” and Nakatani Tatsuya’s “Nakatani Gong Orchestra.”

Jasper magazine is a Columbia-based magazine dedicated to the arts. The magazine and the award are named in honor of Jasper Johns, the American mid-century painter who studied briefly at the University of South Carolina.