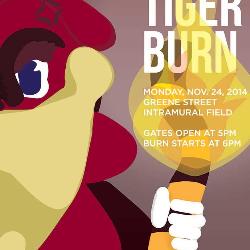 Rivals when it is fun, partners when it matters.

Rivals when it is fun, partners when it matters. The two weeks leading up to the annual South Carolina vs. Clemson football game feature events that challenge fans to participate for their team. While a winner is crowned in the rivalries on and off the field, our two schools are working together to make our communities better. So get involved and support the Gamecocks!

When: Nov. 17-21
Where: Several locations around campus

In the spirit of healthy competition, Carolina's Greek Programming Board, which is part of Fraternity and Sorority Life, organizes the annual Carolina-Clemson Blood Drive to raise awareness about the importance of giving blood. Help UofSC continue its six-year winning streak by donating blood at several locations around campus.

The Carolina-Clemson Blood Drive comes at a crucial time of year when blood supplies are low and many people are distracted by the upcoming holiday season. In 2013, 7,417 units of blood were collected from both schools, and 4,124 of the units were from Carolina fans. Carolina broke the tie and is currently leading the overall competition against Clemson 15-14. Since the blood drive started in 1985, more than 95,000 units of blood have been donated.

All donors receive a free T-shirt, food and drinks. Make sure to bring identification as it is required to donate. If you share a selfie or group shot be sure to tag your images @uscblooddrive on Instagram and Twitter.

Members of Carolina's chapter of Sigma Nu fraternity collaborate with Clemson’s chapter in the annual Game Ball Run, which benefits the Cystic Fibrosis Foundation. Sigma Nu invites all Carolina students to participate in the first leg of the run from Williams-Brice Stadium to the Sigma Nu House in the Greek Village.

Learn more and make a donation to the Game Ball Run. Questions? Email sigmanugameballrun@yahoo.com. If you volunteer to run or come out to cheer on the runners be sure to share your photos with @gameballrun and facebook.com/GameBallRun.

Tigerburn, the annual pep rally before the big game, features the traditional torching of a gigantic tiger. Standing nearly 30 feet tall, the tiger is designed and built by a team of undergraduate students in the American Society of Mechanical Engineers. Learn more about the history and tradition of Tigerburn.

Tigerburn will feature Cocky and the Gamecock cheerleaders, the Cocktails a cappella group, trivia, free food and more. The event is free and open to the public. Be sure to tag your photos posted to Twitter with @UofSCTigerburn.

"It's On Us" pledge challenge

When: through Nov. 28
Where: online, Greene Street

Student Government will harness the enthusiasm of Rivalry Week to increase awareness of a serious topic. The organization is encouraging Carolinians to take the “It’s On Us” pledge to stop sexual assault. UofSC and Clemson will compete to see which school can garner the most pledges. The pledges will be tallied on social media by using the joint hashtag #ItsOnUs #UofSC. The winner will of the pledge drive will be announced at the Carolina-Clemson game, Nov. 29.