'It's On Us' to stop sexual assault at UofSC 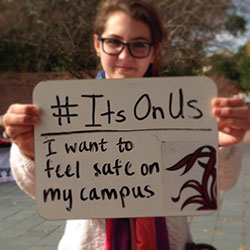 Student Government is encouraging Carolinians to take the "It's On Us" pledge to stop sexual assault.

University of South Carolina's Student Government is encouraging Carolinians to take the "It's On Us" pledge to stop sexual assault.

Student Government will be on Greene Street from 11-2 p.m. on Nov. 18, Nov. 21, Nov. 24 and Nov. 25. where everyone will be given the opportunity to sign the banner and take a picture explaining why it's on us to stop sexual assault on our campus.

UofSC will be in competition with Clemson University as a part of Rivalry Week to see which school can garner the most pledges. The pledges will be counted on social media using the joint hashtag #ItsOnUs #UofSC. The winner of the pledge drive will be announced at the Carolina-Clemson game, Nov. 29.

In addition to the pledges, students are encouraged to change their profile pictures on Facebook and Twitter to  the It’s On Us awareness graphic.

On Nov. 19 at 6:30 p.m., student government  will be hosting a campus discussion along with Sexual Assault and Violence Intervention and Prevention (SAVIP) in Gambrell Hall, room 250. The discussion will cover an overview of Stand Up Carolina — UofSC's bystander intervention program — defining consent, a student narrative and panel from Gentlemen Respecting Interacting in Truth (GRIT) and a Twitter Q&A.

Both Carolina and Clemson also will be participating in a campuswide “white out” against sexual assault on Nov. 20. All Carolinians are encouraged to wear white to show  support for the It’s On Us campaign and to raise awareness for the issue.

The university cares about the safety and well-being of the Carolina community and has resources available 24/7 to assist victims and members of their support networks. The web page sc.edu/sexualassault is the central source of information related to sexual assault prevention, response and reporting.

To find out more about the It's on Us campaign, visit the website.