David Matolak of the College of Engineering and Computing is leading a $4M research project for NASA designed to create safer and more efficient communications in aviation.

The project is part of NASA Aeronautics’ University Leadership Initiative (ULI) that asks colleges to propose how they would like to help NASA achieve its goals. ULI requires schools to take a leadership role and collaborate with other academic and industry partners in order to benefit from multi-disciplinary expertise. Matolak’s team is comprised of 15-20 students and colleagues from the University of South Carolina, NC State University, Boise State University and the Architectural Technology Corporation in California.

While the Federal Aviation Administration regulates aircraft safety and certification, it turns to NASA Aeronautics to study problems of flight. NASA in turn looks to universities for research assistance, which has the added benefit of showing students what their work could look like post-graduation.

Matolak’s research, which began in 2017, is the only ULI study with emphasis on communication and networking issues in aviation. His team is studying advanced, wireless communication networks to enhance the safety and efficiency of air traffic management, including aspects of navigation and surveillance, with both piloted aircraft and drones. Outcomes of the study will enable globally autonomous air traffic management with enhanced flexibility, safety, capacity and resilience. “The communication systems used for aviation will need updating to be more efficient and reliable. That is our overall goal,” said Matolak.

Matolak explains that the team is looking at different aviation frequency bands from a physics perspective. “Those bands have different characteristics, and our aim is to take advantage of those characteristics in pursuit of better air-to-ground, air-to-air, and ground-to-ground communications,” he said. Researchers will characterize capacity and coverage of existing aviation bands, evaluate designs for wireless airport subnetworks, develop drone detection techniques, conduct simulations and build radio system prototypes to test performance.

One large facet of the research will culminate next year in a rare opportunity to conduct a flight test with Boeing, when the team will study its dual frequency band prototype. “Boeing is very supportive of this testing because it’s a nice way to introduce our research and development and demonstrate how it can be used in the near future to improve aviation communication,” Matolak said.

The three-year project is scheduled to conclude in 2020, but Matolak has submitted a preproposal for continuation of related improvements.

Matolak is a professor of electrical engineering in the College of Engineering and Computing. His primary research interests are in wireless communications, and he has worked with NASA for the last 15 years through the Glenn Research Center in Cleveland. 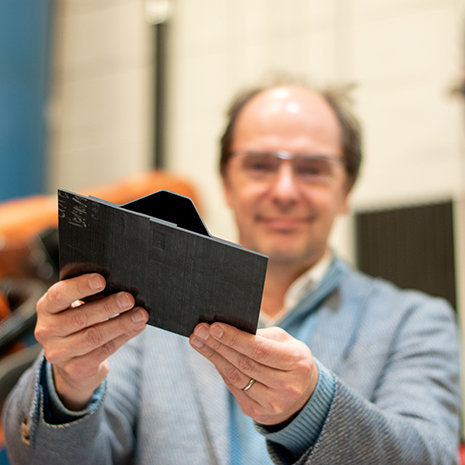 Through a NASA University Leadership Initiative, the UofSC CEC aerospace team will revolutionize the materials and technology used to create aircraft, the speed and cost that parts can be produced at, and aircraft’s overall strength and durability.

More about the NASA ULI

The U.S. Office of Naval Research has awarded a $9.2 million contract for the research of power and energy systems and the development of digital twin prototypes. Advanced power control systems will be developed to intelligently manage the power and energy resources on ships that use directed energy weapons, such as railguns, lasers and missile defense radars.

More about our research with ONR