Intelligence, all over campus

On a visit to campus before taking over as the director of the university’s new Artificial Intelligence Institute, Amit Sheth was surprised to see deans from 10 colleges show up for a meeting with him. 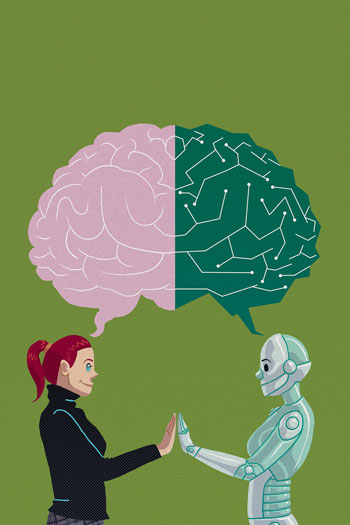 A version of this story appeared in the Winter 2020 edition of Breakthrough research magazine.

That broad and deep interest in how machines can be used to think and work is a key factor in the AI Institute that Sheth is now building here. While AI research and programs are growing around the country, South Carolina’s institute is among the first in the Southeast to include diverse colleges and departments.

Sheth, a computer science educator, researcher and entrepreneur, is a national leader in AI research and implementation. He previously helped launch and direct AI programs at the University of Georgia and Wright State University, and is fellow of the American Association for the Advancement of Sciences and the Association for the Advancement of Artificial Intelligence. He has founded three startup companies and co-founded two others. One of them is Cognovi Labs, which uses AI to understand emotion expressed in user-generated content that can be tapped to make better decisions in a variety of applications including financial services, marketing and branding, and policy. This technology allowed him to correctly predict the results of the Brexit referendum in the U.K. as well as 2012 and 2016 U.S. elections.

Sheth believes Columbia is the right place and now is the right time to build one of the top university-wide AI initiatives in the country. More than 45 faculty members here already are doing AI research in fields including engineering and computing, business, education, social work, arts and sciences, journalism and mass communications, public health, pharmacy and medicine.

“From a global perspective, you can’t find an industry today where AI is not playing a major role,” he says. “Among all technology, AI is growing most rapidly. It’s transforming workplaces, it’s playing a huge role in any new technology services and products that come about.”

And while South Carolina is a small state, there has been strong growth in industry — and those companies are looking for workers with AI skills, he says.

From a global perspective, you can’t find an industry today where AI is not playing a major role.

“In manufacturing and assembly, AI will play a big and important role. But equally important is the chance to look at the state’s initiatives and emphasis. In those areas, like rural health and education, especially creating the future workforce the state’s industry needs, again AI is going to play an important role,” he says.

He says success for the new institute can be measured both by academic success — publications and visibility in academic circles — and being known as one of the top university-wide AI centers in the country.

“The U.S. may still be a world leader in AI research, but the U.S. is not the world leader in AI application and implementation and monetization. China is,” Sheth says recalling the observation made by Kai-Fu Lee, one of the
top AI leaders. “I would like our institute to really be set apart in AI applications, implementations and impact. Given that there are well-funded groups already out there, it would be hard for us to be top five there, but we would like to be among the very top in the implementation and impact.”

Sheth and his team of doctoral students and postdocs who moved to Columbia with him have already conducted National Institutes of Health-funded research in augmented personalized health care, looking at technology to monitor and treat pediatric asthma. His work uses devices like FitBit or others that measure lung function and indoor and outdoor air quality. The technology connects to devices and the internet where it finds information about air quality and pollen in that location — factors that can affect asthma control. His team is already engaged with clinical researchers in hematology-oncology, neurology and pulmonology in Columbia to adapt and apply this line of research.

The university is making a large commitment to the AI Institute, committing $1 million a year for five years. The university also is renovating the top floor of the former law center on South Main Street to house the institute.

“If you have the right technical skills and right leadership it’s possible to make a big impact,” he said. “This is the right time.”