One of the most iconic images of World War II is a black-and-white photo from the Battle of Iwo Jima that shows Marines raising the U.S. flag atop Mount Suribachi. That image, captured by photographer Joe Rosenthal with The Associated Press, won a Pulitzer Prize and became the basis for Marine Corps Memorial near Arlington National Cemetery.

But that photograph is far from the only image of the bloodiest fight in Marine Corps history, which marks its 75th anniversary this month. The University of South Carolina’s Moving Image Research Collections in a partnership with the History Division of the Marine Corps is digitizing films shot by more than 50 Marine combat cameramen who operated across the 8-square-mile island of Iwo Jima during the battle. The goal is to provide public access to the video and expand historical understanding.

“For many decades, the visual records made by Marines have been seen by the public only piecemeal, often with selected portions used as stock footage in films, documentaries and news programs, chosen because a shot has action, not because of the historical context of the imagery. It limits how the public experiences them,” says Greg Wilsbacher, curator of newsfilm and military collections for University Libraries.

“But when you see them in a larger context, when you can spend more time with them — rather than just kind of flooding past you — you might develop a more powerful relationship or individual connection with those images.”

We want to create a trustworthy, historic repository that not only researchers and historians but also Marines and their families will know is authentic. This is our nation's history. It deserves it.

The Battle of Iwo Jima, one of the last major conflicts of the war, began on Feb. 19, 1945. Nearly 70,000 American forces invaded the small Japanese island. The capture of Mount Suribachi happened just four days into the battle, but fighting would continue for nearly five weeks. U.S. troops suffered over 20,000 casualties. It’s believed that all but 200 or so of the 21,000 Japanese forces on the island were killed, as were almost 6,000 Marines.

From the beginning, Marine Corps leaders knew they wanted a comprehensive visual account of the battle — not only for a historical record but also to assist in planning and training for the invasion of the Japanese main islands. Some Marine cameramen were assigned to the front lines of individual units, and others to specific activities, such as engineering and medical units. Films from these units show the daily toll of the battle such as Marines being treated in the medical units or being evacuated off the island to hospital ships as well as essential behind-the-lines tasks of building command posts or unloading and sorting equipment on beaches.

The Marine Corps History Division and the university entered into a partnership about six years ago to preserve the films, which are part of a larger collection that dates from World War I to the mid-1980s. The films were aging and would eventually decompose if not stored and cared for properly. About 14,000 of the 18,000 cans of film held by the history division have been transferred to UofSC’s Moving Image Research Collections for preservation and digitization so far. (Additional film is held by the National Archives and Records Administration.) Previously, these films have been hard to access, but because of this partnership, more than 1,500 videos from the collection, including more than 80 from Iwo Jima, are currently available to the public online.

As films arrive at MIRC, they are stored in a climate-controlled vault for staging where staff and student interns inventory, bar code, inspect and prepare them for digitalization. Once they are processed, they are stored in preservation-grade film cans and moved to another vault to await scanning. 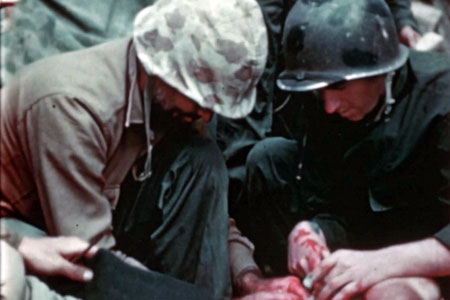 The University of South Carolina’s Moving Image Research Collections, in partnership with the History Division of the Marine Corps, is digitizing films shot by more than 50 Marine combat cameramen who operated across the 8-square-mile island of Iwo Jima during the battle.

Since 2016, 20 students have contributed more than 2,500 internship hours to this project. They help gather and record data, prepare and inspect 16mm films and unpack and inventory shipments.

One of those students is film and media arts senior Luismario Rosas Rivera.

“I looked at every frame on the film to make sure there weren’t any stains or edges that were bad,” says Rosas Rivera. “It was very interesting because I hadn’t worked on film before. It was something new for me — looking at film, not on a computer but physically. The films that stood out for me were those when they were training. I learned they documented everything.”

Another goal of the Marine Corps film project is to identify and label as much of the historical information in the films as possible, such as Marine Corps units and equipment. In addition to manually scanning the films for this information, Moving Images Research Collections has partnered with Research Computing and the university’s Computer Vision Lab, a research group within the College of Engineering and Computing, to use artificial intelligence to recognize text in the films to help identify units as well as individual Marines, airplanes and ships.

Using artificial intelligence and machine learning "can quickly and accurately provide the wanted information to different users, including historians and general users. Just as the computer can ‘recognize’ faces from videos, we can now train a collection of very big and deep artificial networks to make the computer ‘know’ what is the text inside the video and which parts of the videos are related to some topics,” says Liang Zhao, a doctoral student working on the project.

For example, Marines might have names on the sides of their helmets or stenciled on their uniforms. Ship names, hull numbers and tail numbers on planes also provide identifying information that is searchable by anyone viewing the films online.

In addition to the artificial intelligence project, Wilsbacher and Song Wang with the Computer Vision Lab are seeking funding options for the development of a new web portal that would help make the films and their historical record more accessible to research partners elsewhere.

“We still have a lot to learn about how we digitize motion picture film in a way that secures the historical provenance,” Wilsbacher says. “We want to create a trustworthy, historic repository that not only researchers and historians but also Marines and their families will know is authentic. This is our nation's history. It deserves it.”