Poetry MFA Joy Priest kept getting amazing offers; she turned down all but 1 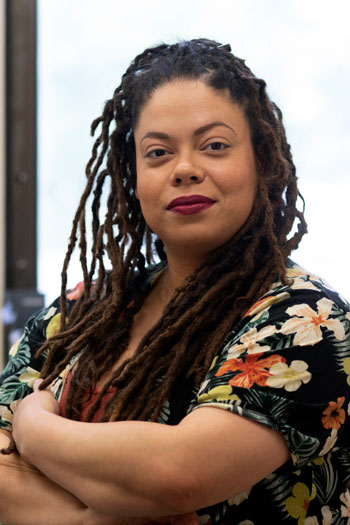 Joy Priest will graduate in May with an MFA in poetry. She has accepted a fellowship at the Fine Arts Work Center in Provincetown, Massachusetts.

The first notice came from the Ph.D. program in English at the University of Wisconsin. Then came an offer from the University of Houston. Then Florida State. After that, she got a call from one of the most prestigious creative writing fellowships in the country, the Wallace Stegner Fellowship at Stanford.

Joy Priest turned them all down and accepted a highly coveted seven-month fellowship at the Fine Arts Work Center in Provincetown, Massachusetts, instead.

For Priest, who finishes her MFA in poetry at the University of South Carolina this May, the spring semester has been one incredible offer after another, an ongoing affirmation of the Louisville, Kentucky, native’s decision to move to Columbia in 2016.

She can thank National Book Award-winning poet and endowed professor of Southern literature Nikky Finney for that much. Priest’s work stands on its own — her poetry has been included in Best New Poets twice, in 2014 and 2016, and she has high hopes for her recently finished book-length thesis, Horsepower — but it was Finney who encouraged her to pick up roots.

The two met in 2011 at the University of Kentucky, Finney’s previous academic post, when Priest interviewed the poet and professor for the student newspaper upon the announcement that Finney had won the National Book Award. Inspired, she took a couple of Finney’s creative writing workshops, worked on her craft, logged the hours. Gradually, she earned Finney’s respect.

“Nikky is a very humble person, but she has a certain presence that can seem intimidating,” says Priest. “She’s also old school about the work. She is not going to leap with praise. You have to earn it. She wants to see that you are doing the work.”

A few years later, Priest was still doing the work, but like a lot of 20-somethings, she was also working odd jobs, trying to figure out her path. She began one MFA program but was unhappy. Then she called Finney, who suggested she apply to the MFA program at South Carolina.

Of course, I take credit for the writing, but there is something to be said for curating an application, understanding the process, and my dream team definitely helped me with that.

For Priest, who identifies as a Southern writer, South Carolina made sense. So did working with Finney, who understood the themes Priest was already exploring in her work.

“I write about place,” she says. “I write about the South not as a physical location on the map but also as a sort of historical phenomenon. Most of the poems in my thesis feature a black girl speaker from the South who is trying to escape the conditions in which she grew up.”

After beginning the three-year MFA program, her friendship with Finney grew —“Nikky might be the only person in my life who can see the entire picture, who can fill in the spaces that my book leaves open,” says Priest — but she quickly discovered a much larger family of poets and professors on the South Carolina campus.

“I’m part of a really amazing cohort, there’s four of us, and I feel so privileged to be writing with each of them,” she says. “These types of programs can be very competitive and cutthroat, but it’s not like that here. What allowed me to have such a great experience was the environment that the faculty cultivates.”

She also credits her thesis committee, which was directed by Finney but also included assistant professor of creative writing Samuel Amadon, who helped guide her through the various application processes, and associate professor of English Michael Dowdy, who worked with her on the critical writing samples that accompanied her many fellowship and Ph.D. applications.

“I really had a team behind me — Nikky, Sam and Michael. I asked for their advice and listened,” says Priest. “Of course, I take credit for the writing, but there is something to be said for curating an application, understanding the process, and my dream team definitely helped me with that.”

Her team also helped her weigh her options as the offers and acceptance letters started to roll in, though ultimately, she had to go with her gut — which told her to turn down the Stegner, despite its prestige, and to delay her pursuit of the Ph.D., at least for the next year.

“The Fine Arts Work Center recognizes you as a professional artist. They give you an apartment and a stipend, and then seven months without any distractions just to write,” says Priest, who intends to reapply to the University of Houston for fall 2020. “To say no to that would be to say no to the idea that I am an artist. This is what we dream about, just the time and the space to write.

“I had to say yes to that before I go back to being a graduate student.”