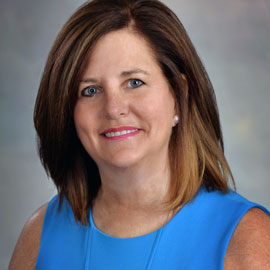 “To this day, I can walk on the Horseshoe and be transported back in time like it was yesterday.” — Cindy Jackson, 2018 Algernon Sydney Sullivan Award winner

Cindy Jackson’s life changed in 2001 when she sustained third-degree burns while living in South America. She was evacuated to the U.S. where she spent the first five months of a two-year healing process.

When the 1981 education graduate returned to South America, where she and her family did mission work, she saw what became of burn patients that didn’t have access to the care she got in the U.S.

“While I had received the best care that money could buy, they had basically received nothing,” Jackson says. “Not long after that, I began to visit the public hospital for burned children, donating every thing I could get my hands on.”

In 2004, Jackson formed a nonprofit organization called Burn Care International that opened its first full-time clinic with a simple, but effective, burn rehabilitation program. Pressure garments, which had helped Jackson, were sewn at the clinic. Patients also had access to physical therapy, nutrition and counseling. In its 14 years, Burn Care International has helped more than 10,000 patients.

“Not being afraid to step out of my comfort zone is something that I think I recognized about myself in college and something that has helped me all these years,” says Jackson, the 2018 Algernon Sydney Sullivan Award winner. The award — the highest honor awarded to Carolina alumni — recognizes outstanding graduates demonstrating professional excellence of character and service to humanity.

Jackson says she never expected to go to Carolina as a high school student in Florence, South Carolina. But as a baton twirler in her high school band, she tried out for the Carolina dance squad, known then as the Carolina Coquettes.

”Even to this day, I am kind of surprised the ‘high school me’ would have the nerve to audition for something so big and new,” says Jackson, who actually graduated a semester ahead of her original cohort in the class of 1982. “I loved being a part of the football and basketball pregame and halftime shows. I was very proud of being a Gamecock, I loved the campus, the friends, my classes, my professors.”

Jackson majored in secondary math education and 10 years after graduating, she and her husband and their three kids went into missions work, first in Ethiopia. Then with a fourth child in tow, they moved to Bolivia where she had her accident.

“I am so thankful for the work that I am able to do with burned survivors around the world and try to live my life by Proverbs 3:27: Do not withhold good from those who deserve it when it is in your power to act,” she says.

Two of Jackson’s daughters graduated from Carolina and she encouraged them to be very active and involved in all aspects of student life.

“So much of your character, work ethic and consistency is put to the test during those college years and a huge bond is formed in this process,” Jackson says. “To this day, I can walk on the Horseshoe and be transported back in time like it was yesterday.”

Jackson says receiving the Algernon Sydney Sullivan “award is an unbelievable honor. I wish (longtime Carolina Band director) James Copenhaver was alive to see me receive this award because he was such a big cheerleader for me and I know he would be proud.” 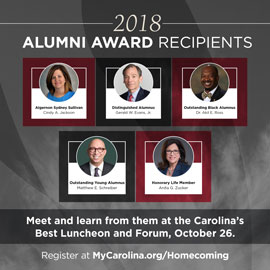 My Carolina Alumni Association has named the recipients of its 2018 Alumni Awards. Register online for a forum, luncheon and awards presentation with President Harris Pastides Oct. 26 from noon to 2 p.m. in the University of South Carolina Alumni Center. Learn more about our award winners: