Campus weather station to change locations after more than 45 years.

Every day for more than 60 years — in heat waves, hurricanes and even the rare Columbia snowfalls — students and faculty from USC’s geography department have gathered downtown weather data for the National Weather Service. 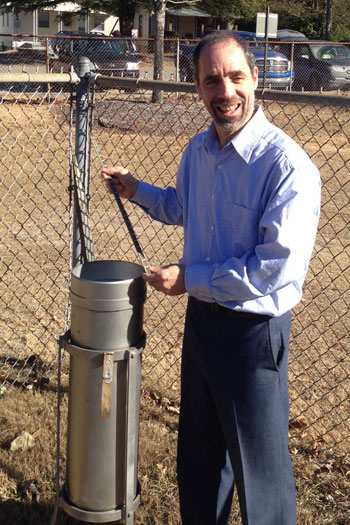 Geography professor Greg Carbone checks the precipitation gauge at the university's weather station, one of about 1,200 across the country that are part of the U.S. Historical Climate Network.

That daily routine won’t change, but the university’s weather station is going to move, and geography students will have a hand in determining the new site.

“We’ve been measuring temperature and precipitation on campus since 1954 and specifically at our station just north of Bates House since 1973,” says Greg Carbone, a geography professor who joined the department in 1989 and oversees the daily recording and reporting duties. Carbone has received a service award from the National Weather Service for his continuous oversight of the campus weather station.

“With the Campus Village construction on the horizon, we’re going to move the station to a new location that will allow us to continue this important data set for downtown Columbia.”

USC’s weather station is one of more than 10,000 cooperative stations in the country but among only about 1,200 that are part of the U.S. Historical Climate Network. The smaller set of stations have been gathering weather data for at least 60 years, and those records are used for long-term climate assessment, research and to establish an unbiased, accurate historical climate database for the United States. USC’s dataset is also included in the Global Historical Climate Network.

“If we move our weather station to a site on campus that varies too much from the Bates House location, there’s the risk that the data from the new site won’t reflect the old site,” Carbone says. “Then we would have to start all over, and that’s not good from a long-term climate study point of view.”

Carbone has identified several alternative sites and previewed them with National Weather Service officials. The next step will be to temporarily set up weather recording equipment at each site, collect the data and compare it with the Bates House site over the next several months.

Spring semester students in Carbone’s Geography 202, Weather and Climate, will use the site comparison as a class project to ultimately determine the final location for a new campus weather station to be established before Campus Village construction begins around 2020.

“Students have played an important role in the USC weather station since it was first established, so it’s fitting that they should take part in the planning and research necessary to find a new location,” Carbone says.

Daily recorded weather observations in Columbia began in 1836, first by newspapers and the U.S. Army, then by the then-named U.S. Weather Bureau in 1890. When the Weather Service moved its offices out of downtown Columbia in 1954, a cooperative weather station was established at USC under the supervision of Guilbert Graham, an associate professor of geography. Nineteen years later, the site was moved from LeConte College on Gibbes Green to its current location on the north side of Bates House.