Social justice for all 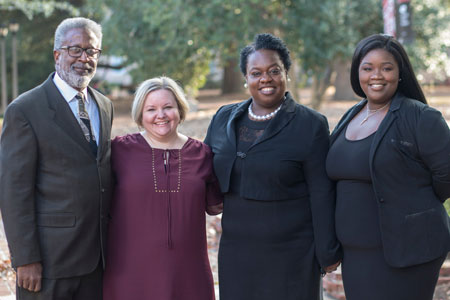 Two professors, a student and a staff member have been selected as 2018 recipients of Social Justice Awards by the University of South Carolina’s MLK Day planning committee.

The four honorees will be formally recognized at the annual MLK Breakfast, to be held this year on Jan. 19 in the Zone at Williams-Brice Stadium at 7:30 a.m.

This year’s recipients are Michele Myers, a clinical associate professor and MAT program coordinator in the College of Education; Ken Campbell, an associate professor in the School of Journalism and Mass Communications; Daizha Green, a senior early childhood education major in the College of Education; and Sarah Keeling, manager of student services in the School of Library and Information Science.

Myers, who earned her Ed.S. and Ph.D. from USC and was a teacher and school principal for 18 years in South Carolina, has been a faculty member in education at Carolina for the past four years. Recognizing the need to help emerging teachers understand culturally relevant practices, Myers developed courses for undergraduate and master’s level students that highlight the nature of identity and also explore privilege. In addition, she recently published a book chapter about social justice in early childhood education and earned a Cultivating New Voices Among Scholars of Color fellowship. She is the incoming chair of the Early Childhood Educational Assembly of the National Council of Teachers of English and an active leader and participant in the Office of Diversity’s activities.

Campbell, a former journalist and veteran faculty member, launched the school’s Media and Civil Rights Symposium in 2011, led its efforts to increase newsroom diversity by training minority journalists through the Southeastern Multicultural Newspaper Workshop and created a diversity course that addresses the roles of women and minorities in the media. Campbell also created one of the first multicultural journalism workshops to encourage high school students to pursue mass communications careers. His research addresses First Amendment legal history, media coverage of lynchings and representation of African-Americans in the media.

Green is a student leader on racial issues in the College of Education who is known for her ability to talk with peers and colleagues about issues of race in loving, impactful ways and drive discussions in directions that reveal deeper insights for all. Green is a member of the Urban Education Cohort, a select group of early childhood education students who complete a two-year intensive study of urban education, and co-founder and current president of REACH (Race, Equity and Advocacy in Childhood Education), a student organization within the college that seeks to combat racism. REACH has welcomed national speakers and organized a student task force to address racism in Five Points, and Green and her peers presented REACH work at the 2016 annual convention of the National Council of Teachers of English.

Keeling has volunteered with the Simple Justice Black Lives Matter organization in Columbia. She also formed the Columbia chapter of Showing Up for Racial Justice, leading a multiracial movement to build a racially just society. Keeling is a vocal protester against neo-Nazism and fascism and advocates for immigrants, victims of sexual assault and the LGBTQ community. She recently completed training at the Modjeska Simpkins School, which prepares S.C. community leaders to influence public policy.

Learn more about events at UofSC celebrating the life of the Rev. Martin Luther King Jr.