Fingerprints to the past 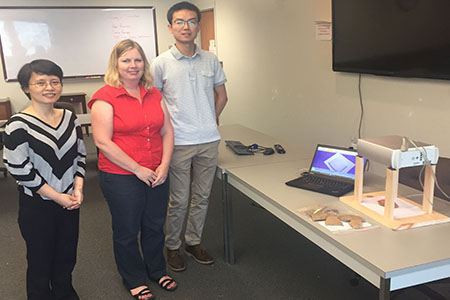 Jun Zhou, Karen Smith and Yuhang Lu are using a 3D scanner to build a database of prehistoric pottery designs. The multidisciplinary project will ultimately help researchers track human interaction and migration in the South more than 1,500 years ago.

Cutting-edge computer vision technology could help unlock the mystery of how people interacted and traveled in the Southeast more than 1,500 years ago.

Researchers at the University of South Carolina are working to create a software program that will automatically match prehistoric pottery fragments, or sherds, with whole designs. The project is a collaboration between the College of Arts and Sciences’ Center for Digital Humanities and S.C. Institute of Archaeology and Anthropology, the College of Engineering and Computing and Research Computing Center. The work is funded by grants from the National Science Foundation and National Park Service.

Native Americans carved the designs into wooden paddles about the size of ping-pong paddles and stamped them onto the pottery during the Woodland period, from about 100 to 900 AD. Known as Swift Creek pottery, the fragments — called sherds or potsherds — have been found throughout the South, mainly in Georgia, northern Florida, parts of western South Carolina and eastern Alabama.

“Pottery paddles are like fingerprints in a way,” says archaeologist Karen Smith, director of the Institute of Archaeology and Anthropology's Applied Research Division. “At the most basic level, they are indicators of individual artists. Some sherds in middle Georgia were impressed with the same paddles as sherds in Florida. That’s almost unprecedented in our field that we can see people, paddles and movement.”

Needle in a haystack

Swift Creek pottery has attracted interest from archaeologists because of its prevalence in the region and the opportunity it presents to track human interaction and migration. In the 1940s, archaeologists discovered that complete paddle designs could be reconstructed from sherds and that certain designs were widely distributed across the region.

Two pioneers in this field — archaeologist Bettye Broyles and naturalist Frankie Snow — devoted their careers to piecing together individual Swift Creek sherds and recreating whole designs. Together, they reconstructed about 900 paddle designs from dozens of sites.

However, Broyles is no longer living, and Snow has retired. Smith, who has studied Swift Creek pottery throughout her career and published articles on the designs and pattern matching, is interested in finding a faster way to reconstruct entire paddles.

“We lack efficient methods for combing through the volumes of material from Swift Creek sites that reside in curation facilities across the Southeast,” she says. “Finding sherds that match a particular known design is akin to finding a proverbial needle in a haystack.”

Speeding up the matchmaking process

Enter the collaboration with Colin Wilder of the Center for Digital Humanities, Song Wang, professor in the College of Engineering and Computing, and Jun Zhou of the Research Computing Center.

Using digital imaging and analysis technologies, the group is developing algorithms and software that will match patterns between sherds and designs.

“We are speeding up a task and making it hundreds of times faster,” Wilder says. “This is a task that is tedious and difficult to do, and there are large collections of unprocessed pottery. There is a huge mystery out there. What is the actual story of these people and their movements? It’s within the realm of the possible to find out.”

This summer, Smith and her graduate students will travel to various Swift Creek pottery collections in Georgia to scan pottery sherds and begin building a database of images.

There is a huge mystery out there. What is the actual story of these people and their movements? It’s within the realm of the possible to find out.

Because the sherds are fragmented parts of whole designs that have been around for thousands of years, a 3D scanner coupled with developing new data processing algorithms are key tools to making matches, explains Wang, whose research expertise is in computer vision and image processing.

The software will extract patterns from an individual sherd, identify the underlying design and ultimately connect it with a corresponding reconstructed whole design. Because paddles were applied to pottery multiple times to imprint designs, this presents a challenge that Wang is eager to tackle through developing new algorithms.

“Solving this problem will advance and extend the basic computer vision research on shape and partial shape matching, which have been studied for a long time in the computer vision field,” Wang says. 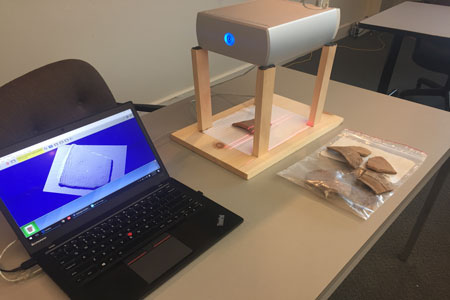 Designs on Swift Creek pottery are like fingerprints of the artist and can offer information about location and time.

One of the reasons the computer vision approach works is because the paddle designs are not random but rather follow certain regularities and rules, which Smith has studied closely. The earliest pieces started out with simple lines, and more intricate patterns began to appear in later years, peaking around 550 AD. Some pieces from this period include framing lines around the central design.

“Through this project, we can begin to map out how creativity in this artistic system changed through time, as well as when, where and how designs were copied,” Smith says.

According to Wilder, the ultimate goal is to create a website where archaeologists and other interested individuals can upload photos of sherds, access the pattern-matching technology and identify pieces right away.

For Smith, the project will open the door to asking further research questions about the pottery’s composition and chemical makeup. The partnership with colleagues throughout the university continues to be a rewarding experience, the researchers agree.

“When you think about what it means to be on a campus like ours and make these types of connections for research, that’s exactly the type of collaboration we show with this project,” Smith says. “It’s going to pay dividends.”

Topics: Faculty, Research, College of Arts and Sciences, College of Engineering and Computing