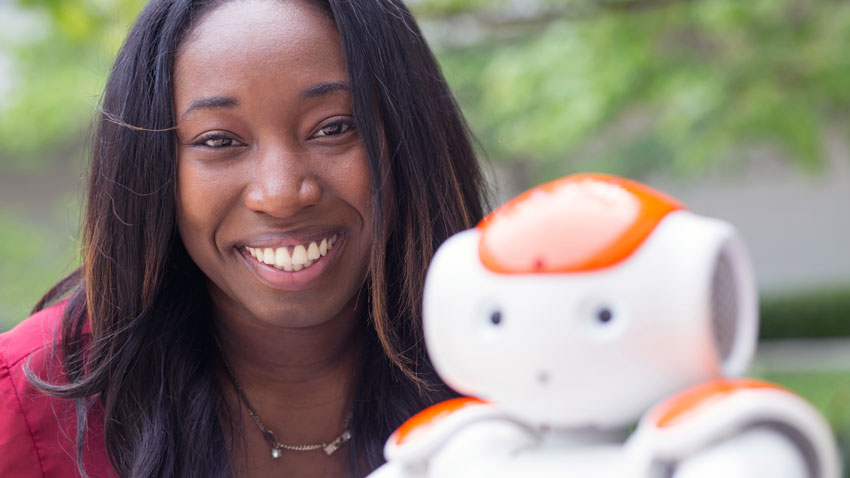 Five years ago, De’Aira Bryant couldn’t take a math course as a high school senior in rural Estill, South Carolina. There wasn’t one available. She had already taken all the math courses offered in her school by that time. As for computers, she had taken keyboarding — the only offering at her school remotely connected to computer science.

Now Bryant is about to be a first-generation college graduate with a degree in computer science from the College of Engineering and Computing. She’s also the recipient of a prestigious National Science Foundation award, which she’ll use to pursue graduate studies, based on the impressive research she’s done while a student at Carolina. Some of the research involves a robot programmed with hip-hop dance moves — but more on that later.

“I remember being completely lost in my first computer science and mathematics lectures at the university. Convinced that computer science was simply creating fancy pictures on a screen with Photoshop, or something like it, I had a shocking wake-up call,” says Bryant. “However, despite my struggles at the beginning of freshman year, I completed Algorithmic Design I and Calculus I with A’s and have been enchanted by programming and computation ever since.”

Bryant considers her path in computer science to be somewhat of an accident. Even though she was valedictorian of her high school class and was good at math and computers generally, she didn’t have a concept of what computer science was. That changed when she started her university coursework, meeting graduate teaching assistant Karina Liles and Jenay Beer, assistant professor of computer science and engineering, both of whom encouraged her to join a research team in the lab studying how humans interact with robots.

Fast forward a few years and she now plans to pursue graduate studies at Georgia Tech, including future doctoral work in the hopes of becoming a college professor.

The Assistive Robotics and Technology Lab at the college played a key role in Bryant’s desire to pursue a career in research and academia. And it played a role in her being one of the relatively few annual recipients of the prestigious National Science Foundation award. Bryant thought she had little chance to get it but was encouraged to apply for it anyway by Beer.

I wanted to do this study because of the resource-gap that separates many school systems in South Carolina and across the U.S. I hope this is a step in the right direction to providing students an equal opportunity to experience computer science in their schools.

As a sophomore, Bryant began volunteering in the computer lab with Beer as an undergraduate research assistant. The following year she was hired to continue the work she started in the lab and was pushed to go further and further. The sky was the limit — a cliché, sure — but in this case, true. She has traveled across the country and overseas to present her research findings. She hadn’t been on an airplane at all before she got to the university.

“I’ve enjoyed teaching and working with De’Aira, and I will miss her creative, ever-curious mind when she graduates,” says Beer. “I’m so proud of her achievements. Her passion and drive have inspired me just as much as she has inspired those students.”

As a computer science major, she was exposed to numerous projects in the field of human-robot interaction. Over the past two years, she has gained valuable skills in conducting literature reviews, preparing user studies, collecting data, collaborating with peers and writing technical papers.

“The experiences I’ve had here at the college have really had a profound impact on me. Without the mentoring, the encouragement and support from my professors, and from Professor Beer in particular, I don’t know where I’d be,” says Bryant.

The achievement she’s most proud of is her work with children through “Ms. An” — Meeting Students’ Academic Needs — a $20,000 humanoid robot that Bryant has programmed to perform hip-hop dance moves. While it might sound like fun, which is certainly is, “Ms. An” excels at helping teach math and computer science to elementary and middle school students.

Bryant won funding as a Magellan scholar earlier in her college career, allowing her to conduct her own research project with “Ms. An.” The goal of the project has been to increase the exposure of African-American and Hispanic/Latino students to the field of computer science through the development of a programming simulation that incorporates dance and the robot.

It seems only fitting that the pilot test for the study will be conducted in her very own hometown of Estill. She uses the real robot as a basis for an online computer game she wrote that lets students program their own dance moves for the virtual “Ms. An.” This makes computer science a lot more fun for the students.

She hears from teachers in other school districts and from parents who want to know more about the robot and how the kids use it. The students go crazy when she brings the robot to the classroom.

“I wanted to do this study because of the resource-gap that separates many school systems in South Carolina and across the U.S. I hope this is a step in the right direction to providing students an equal opportunity to experience computer science in their schools,” says Bryant.

She has made the most of her four years at the university. Bryant is the co-founder and current president of Minorities in Computing, a group that focuses on the acquisition and retention of minority students in computer science and engineering. She also has been an active member of the Theta Gamma chapter of Alpha Kappa Alpha Sorority.

Beyond her research, teaching and extracurricular activities, she also volunteered with the Hour of Code, FIRST Robotics competitions, the College of Engineering and Computing’s annual E-Week Open House and the Mad Science Day at the Boys and Girls Club. Diversity and inclusion within the STEM fields are very important to Bryant. Seeing young students being challenged in computer science reminds her of how she felt just a few short years ago.

“The experiences I’ve had here have been essential in crafting my future goals,” Bryant says. “I will cherish them for the rest of my life.”

This story was also published in Inside Carolina, the University of South Carolina’s alumni newsletter, which is emailed monthly to university alumni and supporters.