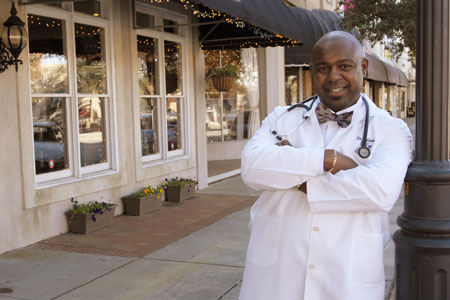 Sometimes the perks of Travis Novinger’s job take the form of pound cake or fresh tomatoes.

Novinger, a family medicine practitioner at Palmetto Family Medicine of Cheraw, has been working in the small town on the Pee Dee River in Chesterfield County since graduating from the University of South Carolina School of Medicine in 1999 and completing his residency at McLeod Family Medicine.

“We took good care of a lady the other day, and she brought back two pans of lasagna for the staff,” Novinger says. “Those kinds of things are nice, and you can’t put a price on that.”

However, there are other, more measurable costs of doing business as a general physician in a rural area that are cause for concern.

“We have an aging population, increasing rates of chronic illness, a very rural state and a dwindling primary care workforce,” says Bill Anderson, the School of Medicine’s chief medical officer and associate dean for clinical affairs. “There are some counties that have one or two (family practice) physicians, and that’s it. The scope of the problem is huge.”

A key element is the South Carolina Center for Rural Health and Primary Care, a School of Medicine Center of Excellence for Rural Health. The umbrella coalition is designed to foster collaboration with community partners including the S.C. Office of Rural Health, the S.C. Area Health Education Consortium, the Department of Health and Human Services, DHEC, the S.C. Hospital Association, and other state health sciences institutions. Anderson says the center’s approach is cooperative, seeking to encourage communication and coordination and avoid duplication of efforts.

“The vision would be that this could be a launching pad for improved research, education opportunities for students, and cooperation regarding the pipeline,” Anderson says. “It’s about creating that infrastructure and that support for care within a rural community, and it’s also about partnering with the community to know what its needs are.”

The ICARED vision has gotten the attention and support of state legislators. In the program’s first year, $1 million of the $2 million it received in state funding went to start a primary care residency in Sumter, one of 21 counties where there are 1 to 2.9 family practice physicians per 10,000 residents.

In its second year, ICARED received $2 million, and, in partnership with the S.C. Department of Health and Human Services and university health sciences schools, is expanding clinical services in the underserved areas of Orangeburg and Winnsboro, among others. The Winnsboro practice is the only obstetrics provider in Fairfield County and also offers rotations for USC residents and medical students, Anderson says.

Collaboration with Carolina health sciences schools, including pharmacy, social work, public health and nursing, consolidates the unviersity’s expertise in research, education and clinical care, Anderson says, and the program’s fiscal future looks even brighter. The program has submitted a proposal to receive additional dollars for ICARED and for the Center of Excellence for Rural Health, and Anderson hopes a significant amount of those funds will be recurring.

“It’s an important program,” Anderson says. “It’s placing a focus on delivery of health care services in rural and underserved areas of the state.”

The investment is paying off, as evidenced by the 11,000 doctor visits tracked so far in the program.

“The average no-show rate when we have patients who come from the surrounding rural communities is around 40 percent,” Anderson says. “That drops to somewhere around 15 percent to 20 percent when we actually provide care in the community.”

In Darlington County, there are 3 to 4.9 family practice physicians per 10,000 residents. That includes Leroy Robinson, an obstetrician/gynecologist who’s been in Hartsville since 1994. Robinson graduated from the School of Medicine in 1990.

“I had thought about general surgery, and OB/GYN was a good way to do a combination of primary care and surgery,” Robinson says.

A scholarship through the S.C. Department of Health and Environmental Control required Robinson to practice in an underserved area. He says such incentives are key to attracting more physicians to rural areas — a reality addressed in the $2.69 million in scholarships and loan repayments that made up ICARED’s 2016-17 budget, according to Anderson.

“Often in rural areas, people will have difficulty getting access to health care, so you may not make as much money as some of your colleagues in the bigger cities,” Robinson says. “With students coming out of medical school with loans and debt, they’re less likely to consider those areas.”

When you practice in a small town, you become part of the community.

The demands on rural doctors go beyond the financial. Glenn Welcker, a 1991 School of Medicine graduate, ran Hampton Family Practice in Hampton County for 17 years before leaving to become the emergency room director and chief medical officer at Hampton Regional Medical Center in 2011.

Welcker saw 70-90 patients in a typical day, which began around 6 a.m. and usually ended around 8 or 9 p.m. Those days threatened to become longer with health care reforms necessitated by the Affordable Care Act.

“It was my calling to come back to a small town to do primary care,” Welcker says. “But I’ve got two boys, an 18-year-old and a 10-year-old, and they were growing up without me in their life.”

The nitty-gritty end of the medical business also includes the reality of fluctuating Medicare and Medicaid reimbursement rates that can have a disparate impact on rural practices.

“I have to see Medicaid (patients) because I’m in rural South Carolina, and I get paid the same price as someone who’s in Columbia,” Novinger says. “There aren’t as many commercial insurances, so my best payer is Medicare.

"In Columbia, your best payer is probably Blue Cross and Blue Shield. There needs to be some kind of payment adjustment for seeing folks in rural America, and then all of a sudden doctors would show up.”

Despite the challenges, Novinger says the benefits — including homemade treats — outweigh the drawbacks.

“When you practice in a small town, you become part of the community,” says Novinger, who lives one block from his office, two from his church and a half-mile from the hospital. Granted, he often runs into patients seeking advice while shopping or eating dinner, but the sense of family that permeates his practice makes that OK.

“You get to know these folks on a more personal level than if you were practicing in Columbia and saw the patient in your office and that was it,” Novinger says. “I’m here because I enjoy patients. I enjoy taking care of them.”

Even though he’s no longer in primary practice, Welcker still experiences that small-town connectivity in Hampton — a county that, like Darlington, has 3 to 4.9 family practice doctors per 10,000 residents.

“There’s such continuity of care,” he says. “I delivered a couple of babies last year in the emergency room, and I see the babies back for follow-up in six months. The tough part is when you get so attached to these people that you go through the illnesses with them and you bear part of their suffering and grieving.”

Welcker, Robinson and Novinger, all S.C. natives, say the emphasis on primary care at the School of Medicine prepared them well for their careers.

“We had opportunities to go out with community physicians and see how things worked in the real world,” says Robinson, adding that colleagues at the medical school and then-Richland Memorial, where he completed his residency, made themselves available to him after he set up shop in Hartsville. “They were still sources of support and guidance even after I left.”

“It wasn’t even on his radar as a place to come, but I just got him here, let him hang out, meet the people and look around,” Robinson says. “That’s part of the issue, getting people just to look at small towns and see what they have to offer.”

The ICARED program aims to address that need, along with a laundry list of others in a state in which 23 percent of the physicians are age 60 or older and rapidly headed toward retirement.

“There aren’t enough physicians in the pipeline to replace them, and it is not just primary care,” Anderson says. “This is all physicians.”

Other facets of ICARED and the center include telehealth and tele-education services, pharmacy extension services and exploring options for extended-hour clinics to add services in rural areas where hospitals have closed.

“It’s daunting, but we’ve been having these conversations for a long time,” Anderson says. “It’s about the coordination of the areas that we have the expertise in, and when we don’t, we bring in the partners that do. 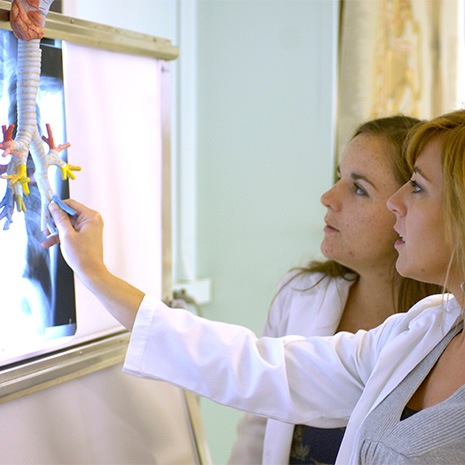 This story was also published in Inside Carolina, the University of South Carolina’s alumni newsletter, which is emailed monthly to university alumni and supporters.